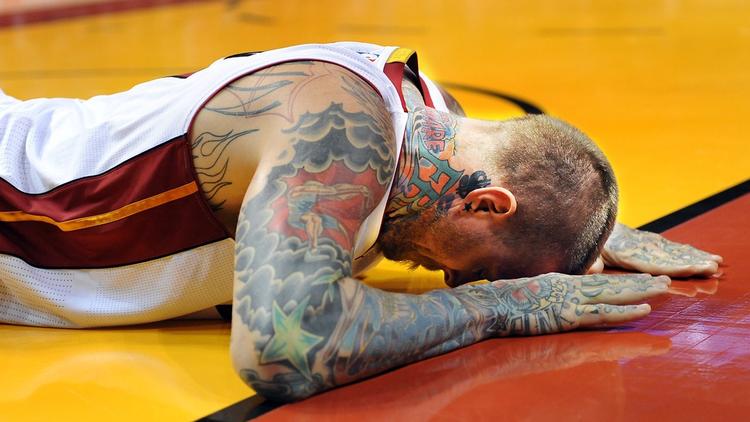 The “Birdman” might be back in flight soon after all.

Ira Winderman of The Sun Sentinel reports that Chris Andersen will likely make his return from a sprained ankle for Tuesday night’s game against the Brooklyn Nets.

Andersen himself made it clear that his return was imminent before the Miami Heat’s victory over the Utah Jazz on Friday night:

“That’s what the prognosis was, was two weeks and rest and strengthening it back up. I’m close. I’m pretty close.”

The “Birdman” has missed nine consecutive games since initially spraining his right ankle on Nov. 23 versus the Charlotte Hornets. In his absence, the Heat have struggled in the rebounding and blocks department. Miami ranks dead last in rebounds with just 35.5 boards per game, while also ranking at the bottom of the league in swats with just 3.5 blocked shots per contest.

The 36-year-old big commented on the impact that he has on the team:

“It’s a different style that I bring. I bring intensity to it. It’s just my skill set that I bring. It is upsetting that I’m not out there. But the style of play I present, I play one way, and that’s wide open. So I’m gonna get hurt sometimes. It’s a contact sport.”

Before taking on the Nets in Brooklyn on Tuesday night, the Heat will return home to face the Chicago Bulls on Sunday night. Andersen likely won’t return for that game because the Heat would like for him to engage in at least one contact practice before returning. Miami does not hold another contact practice until Monday.

The 12-year veteran has averaged 2.2 points, 2.9 rebounds and 0.7 blocks per in nine games this season.
[xyz-ihs snippet=”Responsive-Ad”]