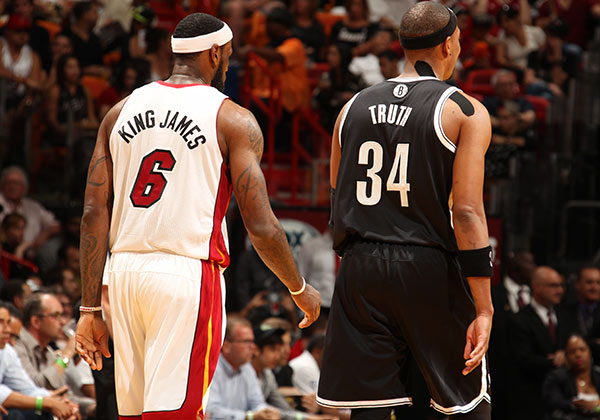 The renewal of an old rivalry adds a new chapter to its books as the Boston Celtics, I mean Brooklyn Nets, take on the Miami Heat. It appears the Nets have the upper hand based on two factors: their regular season success against the Heat and having the best record in the Eastern Conference (34-17) since Jan. 1. But regular season success can be deceiving.

Remember when the 2010-11 up-and-coming Chicago Bulls swept the Heat in three games in the regular season? That success didn’t accumulate the same results in the playoffs, as the Heat easily defeated the Bulls in five games in the Eastern Conference Finals. Or how about when the 2011-12 veteran Celtics took the regular season series 3-1 against the Heat? The Heat went on to defeat the Celtics in seven games and advanced to the NBA Finals. Fans tend to rely on regular season success against one team as a barometer of post-season success and that isn’t always the case. Just ask Heat coach Erik Spoelstra.

In his Saturday post-practice interview with the media, Heat coach Erik Spoelstra was asked if regular season success amassed to postseason success.

“Typically in this league, it just matters about you,” said Spoelstra. “You can do case studies whether things translate from the regular season to the postseason. But even dial in deeper, it just doesn’t from one series to another, or one game to another, or a quarter to another. It’s a whole different ballgame in the playoffs.”

The Heat was without Dwayne Wade for two of those four games and three out of those four games were decided by merely one point. The other game went into overtime, where LeBron James had fouled out in the fourth quarter, providing the Nets with the advantage and the victory. As these numbers may be alarming, James doesn’t think so. When asked by TNT sideline reporter Craig Sager if the Nets were the biggest threat in the East, James dismissed it.

“Get out of here, Craig” said James. “Next question.”

James’ motive might’ve been to play mental games with the Nets and to avoid providing any false sense of hope heading into the playoffs. Regardless of how James may feel, the Heat would’ve preferred to face the Toronto Raptors.

During the Big Three era, the Heat have won 15 straight games against the Raptors. Does this stat sound oddly familiar? If so, it is because the Heat are undefeated against the Charlotte Bobcats, winning 16 straight games in the regular season. That success carried over to the postseason when the Heat took care of the Bobcats with ease, sweeping them in four games.

Clearly, the Raptors have the youth to potentially run with this aging Heat team, but lack the postseason experience to give the two time reigning champs a clear run for their money. The Nets however, are a completely, much more threatening animal.

Paul Pierce and Kevin Garnett don’t fear the Heat. In fact, they would prefer to go through Miami to reach the Finals rather then avoid them all together in hopes that they get knocked off. Just look at their last regular season game as proof.

The Nets could have easily played all of their starters against the underachieving Cavaliers, locked up the fifth seed, played the offensively challenged Bulls, then the dysfunctional Pacers, and finally played the Heat for the Eastern Conference crown. That path would’ve been easier for the Nets, but they decided to listen to their inner Robert Frost and took the road less traveled. They wanted the Heat, now they got them.

The Nets have an all-around balanced roster to provide matchup problems for the Heat. Since the early season ending injury to Brook Lopez, the Nets started to play their own brand of small ball basketball. Shaun Livingston was inserted into the starting lineup at shooting guard, Joe Johnson was moved to the small forward, Pierce was forced to play the stretch four for the first time in his career, and Garnett moved back to the center position, after Kendrick Perkins was traded to the Oklahoma City Thunder.

Livingston being inserted into the starting lineup allowed the Nets starting unit to become more defensively orientated. Livingston, who is 6’7, allows the Nets to be defensively versatile against switches and pick and rolls. Livingston can switch off from Wade and guard James, or Pierce can switch off of James and guard Chalmers. Alan Anderson, Marcus Thornton, Mason Plumlee, and Mirza Teletovic coming off the bench also allows the Nets to insert a wide-range of scorers.

If the Heat starts either Udonis Haslem or Greg Oden, they will play right into the Nets hands. Neither player is effective offensively, which allows Pierce and Garnett to conserve energy on the defensive end. Also, this will cause Haslem or Oden to potentially get caught in cross switches that will force Oden, Haslem, or Bosh to play Pierce and an undersize player to guard Garnett.

The best advice for the Heat is for them to remember who they are. Analysts have been telling them to become a bigger team for years and they seem to be doing just fine for themselves. While teams are starting to adapt to this small ball philosophy, the Heat have already mastered it. If the Heat do start Haslem or Oden, neither player will be on the court for very long. The Heat’s fourth quarter lineup will be a combination of James, Wade, Bosh, Mario Chalmers, and Ray Allen. This small ball brand of basketball was their blueprint to two straight titles so if the Nets want them to play small ball, let them.

After almost choking away their title hopes in the final 13 seconds against the Raptors, the Nets are riding high heading into South Beach. The veteran leadership, youth, and absolute hatred towards the Heat is the perfect set of ingredients for a potential upset. If this Nets team was facing the Heat team of three years ago, the upset would seem more plausible. Unfortunately, these are the 2-time defending champs. The Heat aren’t strangers to all of the trash talk, chest pounding, and knuckle pushups that Garnett and Pierce will provide. These players share a mutual hatred towards one another that has spanned over a history of four years. James is 2-2 against Pierce and Garnett in his postseason career and as this rivalry concludes its final chapter, the rubber match goes to The King.

Kyle grew up in the Bay area, and fell in love with sports at a young age. Whether it was playing, writing, or reading about sports, Kyle indulged himself into that lifestyle. His all-time favorite basketball player is Lebron James, even though he's a die-hard Cleveland Cavaliers fan. Kyle is currently finishing up his degree in journalism at the University of Oregon.