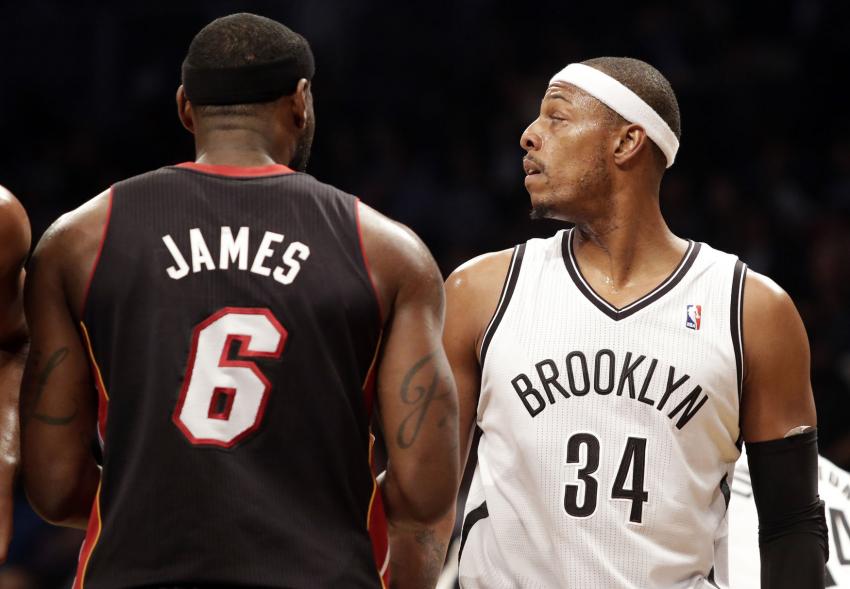 With ball in hand and his non-pivot foot jab stepping, LeBron James found Paul Pierce staring back at him in the pursuit for supremacy in the Eastern Conference yet again on Tuesday night.

With the addition of Pierce and Kevin Garnett, the Brooklyn Nets built a roster to compete with the perennial favorite Miami Heat. However, the Nets struggled to begin 2013, starting the season 10-21 and appeared lost under rookie Head Coach Jason Kidd. Eventually, Brooklyn found their groove, finishing 44-38 and moved on to the much anticipated match up with the Miami Heat in the Eastern Conference Semifinals.

The playoff saga between Pierce and James that dates back to 2007, when James spent his time as a Cleveland Cavalier and Pierce with the Boston Celtics, has intensified in the twilight of Pierce’s illustrious career.

“We are aiming for the same prize and there’s going to be a dislike there,” Pierce stated. “That’s nothing that has carried over off the court. I think everything — the dislike for me, LeBron, or Miami or Cleveland — it’s all based on what we are both chasing, and that is about it.”

As fans may recall, James had a career playoff night in game six of the 2012 Eastern Conference Finals against Pierce’s Celtics, the last playoff matchup for the two foes. Down three games to two in the best-of-seven series, James scored 45 points on 19-of-26 shooting, pulled down 15 rebounds and dished out five assists in a 98-79 win-or-go home road matchup.  The year of 2012 culminated in the “official” crowing of King James, where he earned his first NBA Championship ring by defeating the Oklahoma City Thunder.

Back to the present day; in Miami’s convincing 107-86 game one victory over Brooklyn on Tuesday, five players scored in double figures and as a team, connected on 56-percent of their field goals. Despite waiting eight days between games, the most impressive aspect of the Heat’s game was their defensive intensity. For the first time in his playoff career, Garnett was held scoreless. James honed in on his defensive intensity as well, limiting Pierce to only eight points and forcing contested perimeter jumpers from the veteran known as “The Truth.”

“It was great that we were able to come out the way we did after being off eight days,” James said. “We held each other accountable during the layoff and it paid off.”

For continued success in this matchup, Miami will need to keep penetrating the interior defense of Brooklyn in order to collapse the defense for easy points in the paint or to find the open shooters on the perimeter.  As with many of the Heat’s playoff series over the years, the attention of the defense is placed on James, allowing for one perimeter shooter to be consistently open and stroke the three at will.

On Tuesday, it was Ray Allen, who connected on four-of-seven shots from behind the arc and finished with 19 points in 26 minutes.

“They were the aggressors,” Nets Coach Jason Kidd said about the Heat.  “They kept attacking for 48 minutes and we didn’t.”

Miami dropped all four of its match ups against Brooklyn during the regular season this year, but when it mattered most, the Heat found a way. Despite the misleading blowout when looking at the box score, the game itself proved that the rivalry is still alive and the intensity of these competitors has yet to dwindle over the years. Look for the Nets to make adjustments defensively to keep the Heat out of the paint and create more ball movement with their play makers.

Miami will need to continue their elite defensive effort in forcing contested shots from the perimeter, as well as keeping the floor spread on the offensive end, in order for James to work his way inside or find his open teammates.

If there is one thing to remember going into game two it is that Pierce and the rest of the Nets will not just roll over and let the Heat trample over them.  Expect more physical play in the paint, frequent hard fouls, and the stars from both teams to try and leave their imprint on this series.

“At the end of the day we worry about what’s at hand and that’s winning a championship and holding up that Larry O’Brien trophy again,” James said.