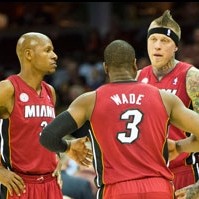 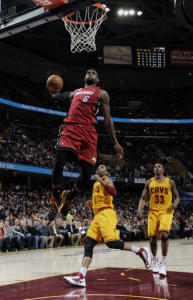 Getty Images: “Witness” has been the term LeBron James and his Nike associates coined in regards to his talents and the sights fans behold. At no other point in his career has this term been more appropriate.”

Tune in to any sports telecast and the defending NBA champion Miami Heat and its historic winning steak are front and center and the rest of the league can only watch.

“Witness” has been the term LeBron James and his Nike associates coined in regards to his talents and the sights fans behold.  At no other point in his career has this term been more appropriate.

The Heat entered the night riding a 23-game winning streak, trailing only the 1971-1972 Los Angeles Lakers 33-game streak for most all-time but have needed crucial comebacks to keep the streak alive.

Following a James game winning shot to defeat the Boston Celtics 105-103 on Monday, all eyes had been fixated on the Heat and whether or not they were capable of making NBA history.

Miami rallied from a 27-point deficit while James recorded his 36th triple-double of his career to hold off the Cleveland Cavaliers 98-95 and extend the winning streak to 24-games.

The Heat were clinging to a 96-95 lead with 44 seconds remaining when Dwyane Wade missed a fade away jumper to extend the lead.  Following the miss, Shaun Livingston attempted a game winning jumper but fell short and after a video review to decide who knocked the ball out of bounds, Miami retained possession.

After an intentional foul, James made two clutch free throws to put the Heat up three with 4.7 seconds left.  C.J Miles’ game tying three was unsuccessful allowing Miami to hold on for the win.

“This was a gut performance for the team,” James said.  “I’m glad my teammates stepped up for me in this reunion tour.”

Bill Sharman, coach of the 1971-72 Lakers team that won 33 straight games, is starting to worry about their historic record.

“It is certainly a possibility that the Heat could break our 33-game winning streak,” Sharman told Fox Sports Florida.  “The record has held 41 years, and all of us that participated in it are very proud to have been part of that season.  However, Pat Riley has put together an amazing team, and I have to admit this one makes me a little nervous.”

Scoring a mere 10 points in the second quarter and surrendering a 19-0 run to Cleveland, Miami found its back against the wall with the electrifying crowd of Quicken Loans Arena eager to pounce on any vulnerability that James displayed.

But Miami proved its worth, sparked by great hustle defensively that led to transition offense, the Heat sprung off a 28-7 run after trailing 67-40 in the third quarter.

Trailing 77-68 heading into the fourth quarter, James made back-to-back three pointers to tie the game at 77.  After a stare down while pounding his chest, a storm of boo’s rained down on Cleveland’s former prodigal son turned Benedict Arnold.

Once he shifted into the next gear that no other player can match, James was unstoppable in leading his squad to a historic comeback victory.

“It was good to dig down deep and get another tough road win” James said. “Every team is going to give us their best shot regardless of their record or who is out there.”

As if the game itself was not exciting enough, a fanatic wearing a shirt that said, “We miss you, LeBron” ran out onto the court while the game was still in progress in the fourth quarter and sought a handshake from King James before being apprehended by several overgrown security guards.

Yet again the Heat were outrebounded by a 42-34 margin but the Cavaliers turned the ball over 17 times leading to 19 points for the Heat, propelling them to the largest comeback in the NBA this season.

Miami will head home for two games against Eastern Conference bottom feeders Detroit Pistons and Charlotte Bobcats before embarking on a five game road trip cultivating with a showdown against the San Antonio Spurs on Sunday, March 31st.

“We are confident we can comeback in a game,” Wade said.  “It’s just a veteran team that is familiar with each other and comfortable playing with one another.”