Gerald Green ‘Safe and Healthy’ After Being Hospitalized for Unknown Reasons 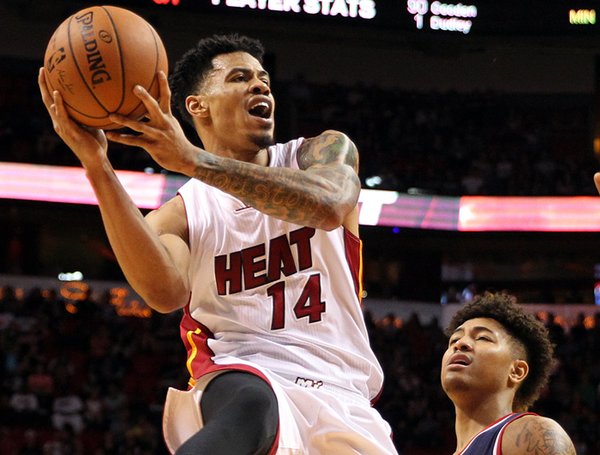 During Thursday’s shootaround at the Target Center in Minneapolis, Miami Heat head coach Erik Spoelstra said that guard Gerald Green was back home after being hospitalized on Wednesday for unknown reasons.

Sun Sentinel beat reporter Ira Winderman indicated that Spoelstra told assembled media that Green returned to his Biscayne Boulevard condominium, but offered no new details about what caused the new addition to the Heat roster to require medical attention:

“We’re grateful that he’s safe and he’s healthy right now,” Spoelstra said. “And our thoughts are with him and his family.”

A 911 call transcript indicated that a woman at the condominium’s front desk was asking for medical help for a resident (Green) who passed out and was bleeding. The Miami Fire-Rescue Department then contacted the Miami Police Department for additional assistance at approximately 11 a.m. on Wednesday.

All three Miami captains were visibly relieved by the news, with Dwyane Wade saying:

“When we found out he’s OK, we moved on,” said Wade. “I talked to him today and he said he was doing better. That’s all I can ask for.”

In that conversation with Green, Wade said that he had received no details about what occurred:

“I mean I really don’t know what the situation is,” Wade said. “I just know our teammate was in the hospital and from there, I found out he was doing better today.”

Forward Chris Bosh echoed Wade’s remarks and lauded teammate Mario Chalmers, who lives close to Green and traveled with him to the hospital:

“We just want him to know that we’re thinking about him and we want him to be healthy,” said Bosh. “We always say we’re a family-first organization and we prove that by just making sure that guys are OK.”

Veteran Udonis Haslem combined his relief with a focus on Thursday night’s game:

“We’re happy to find out he’s OK,” said Haslem. “We have work to do out here. And to know that our brother is OK, we can go out here and play with an ease of mind.”

After tonight’s 8 p.m. ET contest against the Timberwolves, the Heat will travel to Indiana for another 8 p.m. ET contest, this one broadcast nationally by ESPN.
[xyz-ihs snippet=”Responsive-Ad”]