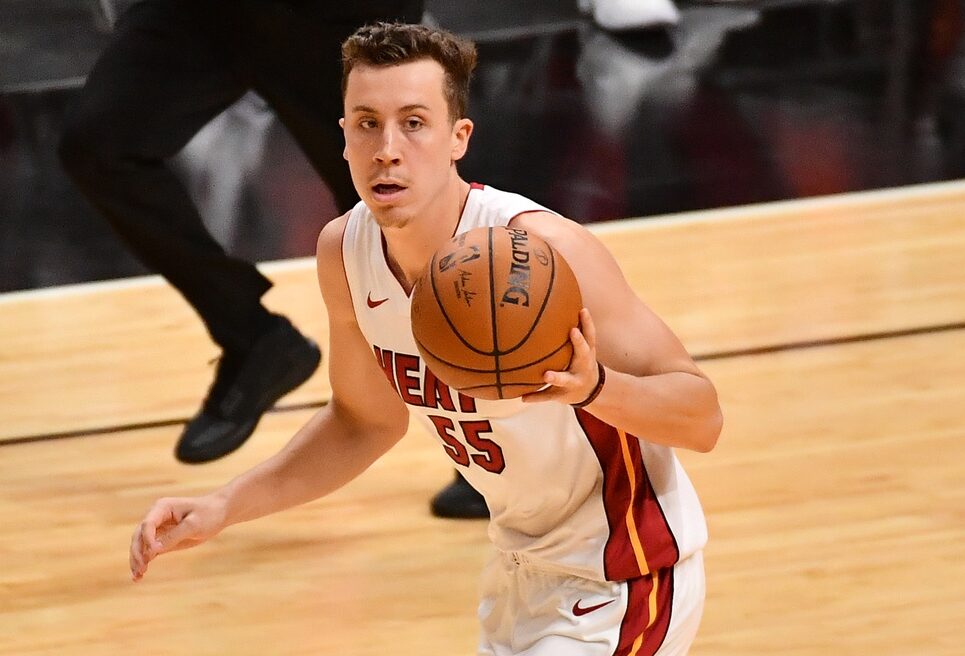 The Miami Heat have one of the most talented young rosters in the NBA today. That talent was put on display in the NBA bubble when Tyler Herro, Bam Adebayo and Duncan Robinson became household names, leading the team to the NBA Finals.

As a result of these performances, Adebayo became a wealthy man with a new contract. According to Luke Adams of Hoops Rumors, it appears Robinson could be well on his way to securing a bigger deal than expected due to meeting some new criteria.

Robinson has quickly proven to be one of the best shooters in the league and will definitely draw some interest in free agency when the time comes.

“As we explain in our glossary entry, a restricted free-agent-to-be is considered to have met the starter criteria if he plays at least 2,000 minutes or starts 41 games in the season before he reaches free agency, or if he averages 2,000 minutes or 41 starts per season in the two years before his free agency,” wrote Adams. “If a non-lottery pick reaches the starter criteria, the value of his qualifying offer increases; if a lottery pick fails to meet it, the value of his QO decreases.

“Because the NBA was unable to play a full season in 2019/20 and only has a 72-game schedule on tap for ’20/21, the thresholds for the starter criteria have been prorated downward. According to ESPN’s Bobby Marks, the criteria will vary from player to player, since it’s now based on games played by his team prior to the hiatus in ’19/20, as well as the 72-game schedule for this season.

“For instance, the Heat played 65 games before the coronavirus stoppage last season and will play 72 games this season, for a total of 137 contests. Robinson needed to start at least half of those games (68.5) to meet the starter criteria.

“Having started the first nine games of this season, Robinson is technically up to 77 starts over the last two years, but eight of those came in Miami’s summer seeding games and don’t count toward the starter criteria. As such, his 69th start of the last two seasons – which pushed him above the starter criteria threshold – came on Tuesday vs. Philadelphia.”

Shooters of his caliber are a premium in the NBA these days, and this development only helps his chances of getting paid what he’s worth. Robinson could be in for a sizable payday, as Adams explains.

“Having met the starter criteria, Robinson – who came into the league as an undrafted free agent – will now be in line for a qualifying offer worth $4,736,102 (equivalent to what the 21st pick would receive if he signed for 100% of his rookie scale amount) instead of $2,122,822,” wrote Adams.

Robinson is currently averaging 12.9 points and 4.2 rebounds per game while shooting 40.7 percent from the floor and 39.7 percent from beyond the arc.

Duncan RobinsonFeaturedmiami heatNews Ticker
← Previous Story Report: Miami Heat release names of 8 players that won’t be available for foreseeable future
Next Story → Report: Miami Heat to use dogs to screen for COVID-19 as they begin welcoming fans back into arena