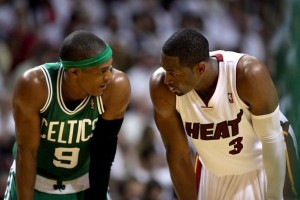 Associated Press: "The battles between the Celtics and Heat over the past two seasons have been well documented and the saga continues with the rivalry of Rajon Rondo and Dwyane Wade, both known to get “chippy” with each other to say the least will also add another chapter."

On Wednesday, LeBron James scored 31 points, had a triple-double and Dwyane Wade led the way with 35 points as Miami came back from a 15 point deficit and a sloppy first half to defeat the Toronto Raptors 123-116 in overtime.

Miami sits atop the Eastern Conference, leading the New York Knicks by two games with a record of 27-12.

With a four game road trip beginning on Sunday, and the narrow victory over the Raptors, it got us thinking, which upcoming games could be trap games that the Heat could lose.

Miami is 10-9 on the road compared to their Eastern Conference leading 17-3 record at home.  Being the defending NBA Champions, the Heat get every team’s best shot while playing in hostile, unfamiliar environments.  It is time for the Heat to find their stroke and prove why they earned the hardware last season.

On Sunday, Miami will travel to Boston in an ABC showcase against the struggling Celtics. Boston has dropped their last four games after riding a six game win streak and has upcoming games against both the New York Knicks and the Atlanta Hawks.  Surely they could easily drop six straight but the resilient Celtics are a veteran club and their stifling defense can be problematic for any team.

The battles between the Celtics and Heat over the past two seasons have been well documented and the saga continues with the rivalry of Rajon Rondo and Dwyane Wade, both known to get “chippy” with each other to say the least will also add another chapter.  This will also be the much anticipated homecoming game for Ray Allen, who returns to Boston after leaving for South Beach this offseason.  Sitting at 20-21 and 8th in the Eastern Conference, look for Boston to make a run and turn things around prior to the All-Star break as many veteran teams do.

After a few days off, the Heat will head to Brooklyn to take on the surprise Nets in the house that Jay-Z built.  Since firing Avery Johnson, Brooklyn has improved to third in the Eastern Conference and has won three games in a row, all against teams with winning records.

With their scoring trio of Deron Williams, Brook Lopez and Joe Johnson combining for 53.0 points per game, you would be surprised that the Nets rank 5th overall in the league in team defense, holding opponents to 94.1 points per game.  With their great team defense, great rebounders and winning 10 of their last 11 games, Brooklyn’s riding a hot streak and poses a threat to Miami in this matchup.

On the bright side, the Heat has defeated the Nets by an average margin of 21.5 points in their previous two matchups this season and will have two days off before the game Wednesday where Brooklyn will be playing their fourth game in six days; therefore fatigue could be the biggest x-factor.

The road trip continues to Indiana on Friday as the surging Pacers will look to remain unbeaten against the Heat this season.   Back on January 8, Indiana defeated Miami by 10 and held the Heat to a season low 77 points.   Indiana is 16-3 at home this season and the size of David West and Roy Hibbert, along with the scoring ability of Paul George (17.3 points per game) has proved to expose the holes in the Miami defense.

The Pacers rank first in rebounds per game (45.7) and points allowed (89.3) both of which have been exposed as the biggest weakness for the Heatles.  For the Heat to win, they will need to hunker down in the paint, survive a physical matchup, and focus on keeping the Pacers off of the glass to prevent second chance points, easier said than done.

Closing out the week long four game road trip Miami will have a rematch with the Raptors at Air Canada Centre Arena.   As I discussed earlier, Miami played a sloppy game at home against Toronto, a young team that is ranked last in the Atlantic Division.  The Heat average only 39.2 rebounds per game, ranking 29th in the league but outrebounded the Raptors by a landslide, 53-28 on Wednesday.  If Miami can sustain that effort on the glass, they should be more than capable of closing their road trip on a high note.

Following their road trip, the Heat will play five of their last six games at home before the All-Star Break, which is now three weeks away.  Two of those home games will be nationally televised games against both the Los Angeles Clippers and Lakers and close out the first half on the season on the road against the Western Conference leading Oklahoma City Thunder.

If Miami can survive the road trip by winning at least two of the four games, they will have a chance to close the first half of the season out strong heading into a much deserved week off for everyone except the “big three” who will head to Houston for the star-studded weekend.