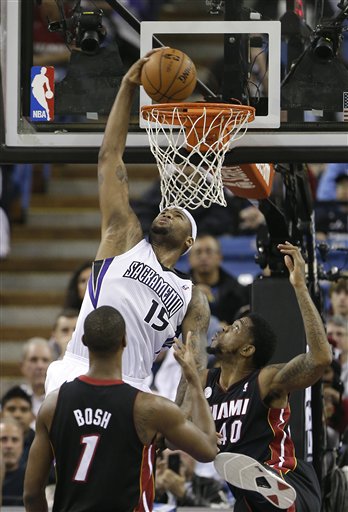 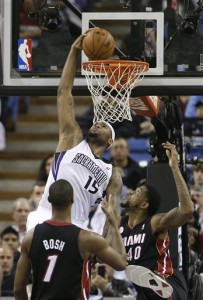 Associated Press: “Cousins’ character issues would be resolved when added to a championship team with veteran stars James and Wade to guide the young man but on the young Sacramento team, his antics are cancerous.”

With the trade deadline just a month away, it is time to consider a few deals the Miami Heat could possibly entertain.

Andre Miller has had a great career but at the ripe age of 36, the time has come to move on to a younger, more athletic point guard to split time with Ty Lawson. Battier could move back to his traditional small forward spot, and become a constant deep threat off of the bench for a Nuggets team on the cusp of making a  playoff push.  At center, Denver has Kosta Koufus, Timofey Mozgov, as well as versatile forward Kenneth Faried who is leading the No. 1 ranked rebounding team with 10.2 per game. This could leave McGee and his contract expendable.  McGee, 24, is a raw center prospect that can jump out of the gym and his athleticism would fit perfectly into Miami’s fast break offense.  He also has the size to defend against the top centers, something Bosh clearly cannot handle, and his rebounding ability would be a huge plus.  He is averaging 10.2 points, 5.2 rebounds and 2.0 blocks per game in only 19.0 minutes of play, numbers that would surely increase in South Beach.  Despite his combination of size and athleticism, McGee is a regular on SportsCenter’s weekly “Not Top 10” for boneheaded plays.

The departure of Chalmers would insert Norris Cole into the starting lineup, as his emergence has been a pleasant surprise but he has yet to have the opportunity to play a full game.  Cole could start and also lead the bench at point guard, and would sit at the end of the game in favor of James and surrounding shooters. This trade satisfies a need for both teams and the money works out as well.

2. Udonis Haslem,  Mike Miller and next year’s first round pick for J.J. Hickson and Luke Babbitt.

Babbitt is a 6’9 small forward that can shoot well and rebound, basically a 23 year old wing player similar to Miller making far less.  The emergence of rookie point guard Damian Lillard has been dazzling and Portland will be set for years with him running the offense, but lack a quality veteran bench to make a playoff run, therefore the addition of a quality shooter like Miller and the post presence of Haslem is necessary.  The Heat do not have time to take a first round pick and hope he can develop in a few years therefore the draft pick will be better utilized by the younger Blazers.  They could even package both their first round picks and the Heat’s pick to move up into the lottery picks.  For Miami, Hickson would reunite with James from their days in Cleveland and can play behind Bosh.  He is young, athletic and would instantly become the best rebounder on the team something Miami is really hurting for.  Although it makes sense, Hickson’s 11.0 rebounds per game has warranted buzz around the league and expect multiple suitors to be calling about a deal for the young forward.

Cleveland needs to clear cap for 2014 and need help at small forward as well as veteran leadership to at the least, ascend for the laughing stock of the league. Battier would be a stretch forward that could play around the perimeter while Kyrie Irving penetrates the defense off of the dribble drive. Haslem brings a scrappy low post presence and has the ability to score when given the opportunity. He would be able to come off of the bench for Cleveland and add another dimension to their lack of quality depth.  Miami needs a high energy big that can rebound and sacrifice points, while setting good screens on the offense end. Varejao fits this better than anyone as one of the league leaders in rebounds and is a favorite of former teammate James. Varejao is out six weeks until March after having surgery to repair a torn muscle in his right quadricep and Cleveland will be paying him the remainder of his 8.4 million salary to sit on the bench in fancy “street clothes” and possibly play the last three weeks of a meaningless regular season for the Cavs.  More than anything, Cleveland would love to dump the remaining 19 million Varejao is owed over the next two years.

On the other hand Miami’s post season push will be in full force by the end of April thus, Varejao will be greatly needed at that point.  For the final piece Cleveland would receive Pittman as a raw prospect with larger than life size standing 7-feet and weighing 285 pounds and is currently averaging 11.7 points and 8.1 rebounds in the NBA D-league this year, continuing to work on his post game.  His power and size alone are enough for a young team willing to take the time to develop his post game much like Andrew Bynum’s progress in Los Angeles.  Pittman is due only 1.1 million next year so financially this works with Battier, Pittman and Haslem making a combined 8.6 million and are only signed through 2014, allowing more space for Cleveland to make a push for a max contract free agent like say maybe their prodigal son LeBron James.

Without a doubt this would be one of the biggest blockbuster trades the NBA has seen, ever.  I already know what you are going to say Heat fans, so lift your jaw back up into place and give me a chance to explain.  Oddly enough, this deal makes sense for both sides.  For one, even with the great start the Clippers have gotten off to, at the end of the season it is still uncertain Paul will resign a max deal to remain in Los Angeles.  Therefore, the Clippers would need to find the best deal possible if they had any indication of Paul’s departure.  With Wade nearing the end of his injury plagued but storied career, it could be time the Heat find a younger replacement to keep James in South Beach for the rest of his career.  What better way than to add a point guard, arguably the best in the league, that just so happens to be James’ “really” good friend.

Paul would take the ball handling pressure off of James, allowing him to roam free and the thoughts of creative transition alley-oops are endless.  Paul is also a great defender, and with Deron Williams, Derrick Rose and Rajon Rondo all potential foes in the Eastern Conference playoff bracket, an upgrade over Chalmers’ lack of defense would be needed.  Lastly, he would be the clutch game finisher that James has yet to master, and could run a pick-and-roll in the final minutes with either Bosh or James.  Hill would simply be involved to satisfy the salary cap of each team, and seeing the court for the first time this season over the weekend, he is an expendable commodity for Los Angeles that could soak up some minutes for Miami to keep players like Mike Miller and Shane Battier fresh.  For the Clippers, acquiring Wade allows them to keep their star power and would allow for Jamal Crawford to continue to flourish in his sixth man role and would see more open shots with Wade’s ability to collapse the defense off of the drive although, it would involve using a creative, smaller lineup.

Adding Chalmers would give Los Angeles a young, athletic backcourt duo along with Eric Bledsoe that could flourish for years to come. “Lob City” would stay true to its’ name with these two guards throwing up half court alley-oops to Blake Griffin and DeAndre Jordan.  It is without doubt unlikely this deal would happen given Pat Riley being known for not making big time in season trades or splitting up stars that could shift the team’s chemistry in the wrong direction.  But if Los Angeles is told by Paul or his agent that he will not resign, Riley would have to at the very least, answer the call from the Clippers regarding the deal.

More than anything this would keep Cousins away from Boston, who last week reportedly were attempting to make a deal for the Kings’ center.  He’s the next best center and at only 22, has the time to develop even more post moves much like Dwight Howard did at the beginning of his career.  Cousins’ character issues would be resolved when added to a championship team with veteran stars James and Wade to guide the young man but on the young Sacramento team, his antics are cancerous.  He is averaging 17.6 points and 10.2 rebounds for one of the worst teams in the Western Conference and his size, strength and rebounding ability are all aspects Bosh does not fulfill and have already proved costly this season.  In the right situation, like South Beach, with two other superstars, Cousins can develop into a star in the post and would be worth the risk of trading the odd man out of Miami’s “big three”.

The Fredette/Miller swap would simply be Miami getting a younger, healthier and cheaper shooter to split time with Ray Allen off of the bench. It would save Miami 3 million in salary and luxury taxes.  The veteran locker room presence of Miller and Bosh would be a welcome addition to the Kings extremely young and inexperienced roster. If there were any of the big three that would get dealt, it would be Bosh.

Or on second thought, maybe Miami should keep their team intact, possibly add an unsigned free agent veteran and as long as LeBron can turn that switch back on and perform down the stretch of games like he did in last year’s playoffs, the Heat will still be the team to beat in the NBA Finals.