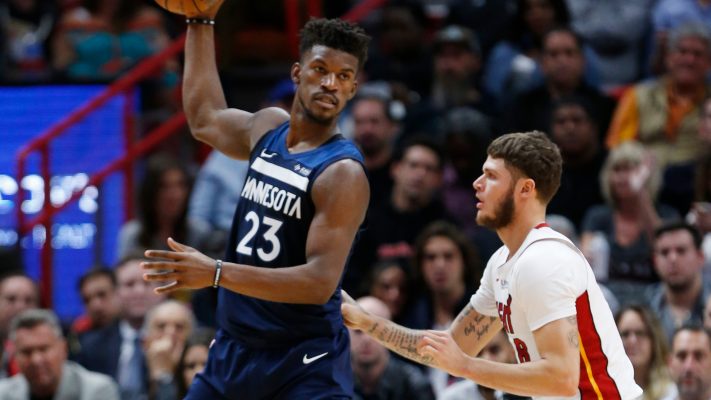 Late last week, it seemed as though the Miami Heat were days, if not hours away from acquiring disgruntled Minnesota Timberwolves All-Star Jimmy Butler.

Since this weekend, the whirlwind of rumors and reports have seemingly cooled, but that doesn’t mean that the Heat aren’t still working to get a deal done.

According to Ethan Skolnick of 5 Reasons Sports, the Heat are doing what they can to get a deal done, but are finding their hands tied due to what seems to be quite a bit of internal strife within the Wolves organization.

“I heard that the last offer that they made was Thursday morning,” Skolnick said. “Now, coincidentally, two reports came out of Houston right after the Heat made their final offer. That strikes me as Minnesota was getting stuff out. That somebody else was interested because a couple of those reports on Friday night were like, ‘A deal is gonna get done by midnight.’ We’re taping this on Monday, there’s been no deal.

“So I don’t think that there’s a market for Jimmy Butler right now because the teams that I thought could get really involved here. Philadelphia, I’ve heard they haven’t put [Dario] Saric on the table, they haven’t put [Markelle] Fultz on the table. You’re not making a deal without putting those two guys on the table. Report comes out today about [Khris] Middleton and that the Bucks said no there. Ok, there’s nothing else attractive on Milwaukee’s roster to frontline a deal, so that’s not happening.”

It was recently reported that the list of players the Heat were willing to part ways with in a deal included Dion Waiters, Justise Winslow, Hassan Whiteside, and Tyler Johnson. While the Wolves are reportedly interested in acquiring Josh Richardson, it seems as though the Heat are keen on holding onto the promising forward.

If the previously mentioned competitors are not prepared to part ways with either established stars or youthful talent, it is quite possible that the Heat’s ability to deal a handful of solid rotational players could be the best offer the Wolves are going to get. That then begs the question why a deal has not yet been completed.

“So who are the Heat competing with? To me this is a game of chicken, and I don’t know if Thibs (Tom Thibodeau) is playing chicken with the Heat or if he’s playing chicken with Glen Taylor, or both at the same time. If you’re the Heat, this is the last thing you want. Stuff’s gotten out now. The Heat don’t like anything to get out in public. It drives [Pat] Riley freaking insane. I’ve had conversations with him about this, this is what he hates about the Twitter era. … His players are asking media members about it. Spo’s (Erik Spoelstra) trying to prepare a team that has 12 players in a rotation for the season. So the Heat’s put in this terrible position like, ‘Get your s— together Minnesota because we’re in a tough spot here.’

“To me what has to happen now, it has to become so uncomfortable for Thibs in Minnesota, that he has to move Jimmy Butler.”

It’s a lot of information to unpack, but it seems clear that while the Heat are ready to make a deal right now, the Wolves are still hoping to get something good out of a horrible situation.

It is unfortunate that Butler waited so late in the offseason to make his desire to be traded known. If he had done this early on in the summer, it is possible that teams could have packaged more attractive deals, and could have had more cap space to move around in order to complete a deal.

As it stands, it seems it may take some time before the Wolves finally decide getting anything in return for the mercurial star is better than having him sit through the entire 2018-19 season only to sign elsewhere when he becomes a free agent next summer.

Only time will tell how long it takes for them to come to that conclusion.
[xyz-ihs snippet=”HN-300×250-TextnImage”]