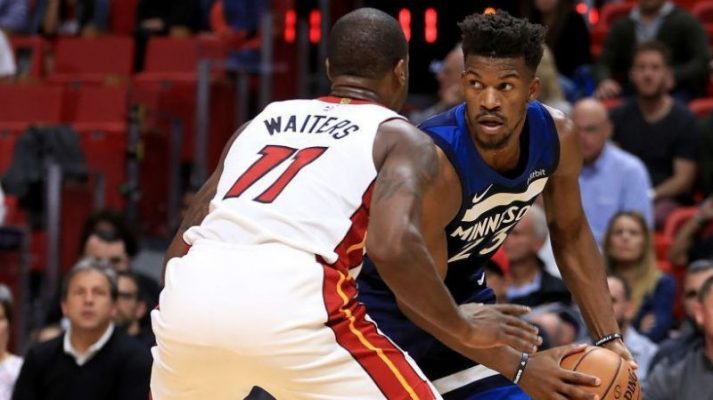 The drama surrounding a potential trade deal between the Minnesota Timberwolves and Miami Heat for All-Star Jimmy Butler rages on, but that doesn’t mean progress isn’t being made.

While several teams around the NBA have been mentioned as competitors to acquire Butler, it seems that the Heat are in clear control at the moment.

According to a recent report by NBA insider Shams Charania, the Wolves are now solely targeting the Heat as a trade partner.

“Minnesota has been in active discussions with Miami,” Charania said. “Most teams around the league, rival teams believe that Minnesota has been pretty much targeting Miami and has locked in on Miami as a potential destination for Jimmy Butler.”

Charania went on to explain that if the Heat and Wolves are not able to agree on a deal, the Wolves’ next move will be to make sure that their disgruntled star reports to preseason activities. While a star staying on a team shortly after requesting a trade is not unheard of in the NBA, it is certainly not the ideal scenario for either party.

“I’m told talks have been going back and forth the whole week, but if they aren’t able to come up with the type of package Minnesota desires, there’s no question that the next step for the Minnesota Timberwolves would be to make sure that Jimmy Butler shows up, reports.

“At some point that’s going to be the next bridge that’s going to have to be crossed, but between now and then the Timberwolves are going to be working around the clock in terms of finding out if they can get what they want, whether it’s from [Miami] or another team that comes in at the last hour. The Clippers are still very much interested, so are the Houston Rockets, but outside of that there are teams in the Eastern Conference that are like, ‘Listen, we are fully under the belief that Minnesota is solely targeting the Miami Heat.'”

A blockbuster deal for the two-way star has seemed very close at certain points over the last week, and very far away at others. Currently, it feels as though both clubs are making their last-ditch efforts to get a deal done.

While Miami could certainly use Butler’s talents on the roster this season, it is heartening to see that it is clearly not willing to give up everything the Wolves seemingly covet.

If team president Pat Riley were able to acquire Butler while also holding onto some of Miami’s key young stars such as Josh Richardson and Bam Adebayo, it would be another clear bit of proof that he is one of the savviest minds in the NBA today.