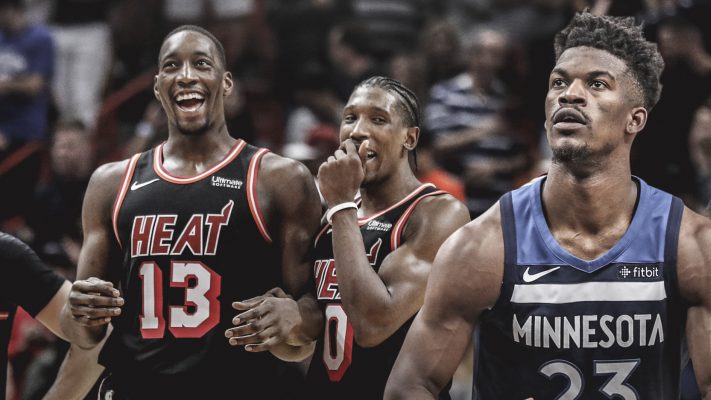 The Minnesota Timberwolves have let the Miami Heat know the type of deal they want to make for Jimmy Butler.

The potential move would send Josh Richardson and Bam Adebayo to Minnesota along with a protected 2019 first-round pick. The Timberwolves are making it harder as the week goes on for the Heat to get the forward from Houston, Texas. This deal is simply ludicrous.

According to Adrian Wojnarowski, the Timberwolves want to send Gorgui Dieng to South Beach as well, due to the $48 million left on his contract. While the Houston Rockets have been rumored to be another potential landing spot for the NBA All-Star, the Heat still seem to be the favorites.

Miami already didn’t like the idea of sending Richardson or Adebayo to Minnesota, but with an additional pick listed, the deal is most certainly going to stall. The Heat are likely not even remotely entertaining the idea of giving up two young stars and another potential player in exchange for the Marquette University standout. The asking price is simply too high.

Of course, Tom Thibodeau could be the man pulling the strings behind the bad offers. It is clear he doesn’t want to trade the 29-year-old star unless he receives everything he wants in return. The Timberwolves’ front office seems to be in line with Thibodeau’s thinking, and aren’t willing to accommodate Miami for the time being.

Minnesota seems content to ride out this season with Butler on the team, and let him test free agency in the summer. This reluctance to work with the Heat in a deal could come back to bite them.
[xyz-ihs snippet=”HN-300×250-TextnImage”]