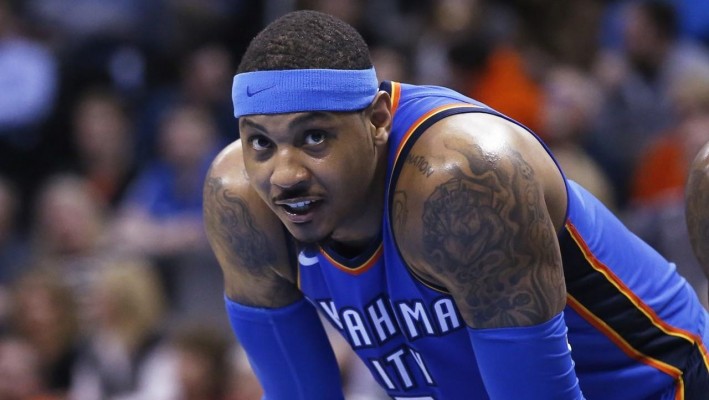 In recent days it was rumored that the Miami Heat were interested in pursuing former All-Star Carmelo Anthony this offseason.

While Anthony is currently a member of the Oklahoma City Thunder, it appears that he will become available this summer either by trade, stretch provision, or a combination of a contract buyout and stretch.

While it was unclear just how serious the Heat were about their interest in Anthony following the initial report, signs are pointing to the fact that they are very serious indeed.

Story filed to ESPN: In advance of an inevitable – if not imminent – parting, the Oklahoma City Thunder granted Carmelo Anthony permission to meet with prospective teams, including Houston and Miami. Meetings took place in Vegas in recent days.

While Anthony struggled with the Thunder last season, he still showed flashes of the elite shooting ability that he has enjoyed throughout his career.

As recently as the 2016-17 season, Anthony averaged 22.4 points, 5.9 rebounds, and 2.9 assists per game. The Heat’s interest in Anthony seems to indicate their confidence in his ability to regain his form as an elite shooter. Considering the ball-dominant players that he played alongside last season, Anthony’s numbers would likely improve on a Miami roster that has a plethora of solid contributors, but few fully-fledged stars.

There is no timetable for when Anthony will be made available, but it seems clear that once he is available, the Heat will be one of the teams strongly pursuing him.

In an offseason that was expected to be very quiet for the Heat, signing Anthony would be a fairly welcome surprise.
[xyz-ihs snippet=”HN-300×250-TextnImage”]