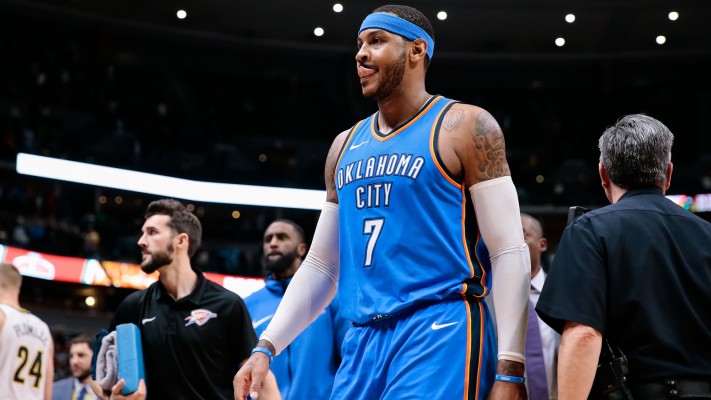 Former All-Star forward Carmelo Anthony is currently a member of the Oklahoma City Thunder, but he might not be for long. Based on a recent report, Anthony and the Thunder are expected to part ways this summer.

According to ESPN’s Adrian Wojnarowksi and Royce Young, the Miami Heat could very well pursue Anthony in the event that he becomes a free agent in the near future:

“Anthony, a 10-time NBA All-Star and three-time Olympic gold medalist, would be pursued vigorously among contenders on the free-agent market. The Houston Rockets, Miami Heat and Los Angeles Lakers are among multiple teams expected to express interest in Anthony, sources tell ESPN.”

The report goes on to explain that Anthony will likely either be offloaded by the Thunder by way of a trade, stretch provision, or combination of a buyout and stretch. Even if Anthony is traded, he would likely be moved to a team that is looking to acquire his massive expiring deal to free up salary-cap space for next season’s free agency. He would then presumably be waived by the team that traded for him and become a free agent.

The Rockets may seem like the frontrunners due to the fact that they were looking to trade for Anthony last summer, but the Heat could very well be a better fit.

Unlike the Rockets, much of what the Heat missed last season was the presence of an aggressive shooter. If Anthony were to join the Heat, he would immediately become one of the team’s best and most experienced scorers on the roster.

While there is no doubt that the 15-year pro is several seasons past his prime, he may be able to recapture some of his former ability just like Dwyane Wade managed to do last year when he was traded from the Cleveland Cavaliers to the Heat midseason.

It will be fascinating to see what comes of this report as the offseason progresses. The Heat were not expected to make many moves this summer, but bringing Anthony to South Florida would be quite the splash indeed.
[xyz-ihs snippet=”HN-300×250-TextnImage”]