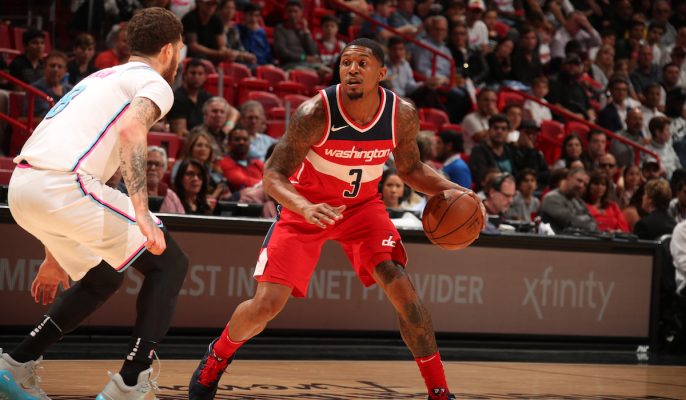 The Miami Heat may have pulled out on a deal to trade for Jimmy Butler, but that isn’t keeping them from exploring other trade options as the season wears on, according to Barry Jackson of the Miami Herald:

“Expect the Heat, now 6-11, to continue to explore potential trades, with Miami seemingly on the road to nowhere with this roster and slipping to 11th in the East, 2.5 games behind No. 8 Orlando.”

The Washington Wizards are reportedly on the verge of blowing up their current roster, and that means All-Stars Bradley Beal and John Wall could very well be on the move. According to Jackson, the Heat are going to see if a deal can get done to bring one of them to South Florida.

“Miami typically inquires about any All-Star players available, and the Heat likely will engage with Washington, which reportedly is listening to offers on guards John Wall and Bradley Beal.

“The Heat holds Beal in high regard, according to a source. But it’s difficult to envision Miami putting together an appealing enough package. He’s due $25.4 million this season, $27.7 million next year and $28.8 million the year after.

“Though Riley always is intrigued by star players, the Heat likely would have interest in Wall only if Miami can dump unappealing contracts as part of the deal. Wall is due $38 million next season, and then $41 million, $44 million and $47 million the following three years.”

There is little doubt that Beal is the more attractive option on paper. Not only is his contract dramatically more favorable than Wall’s, at 25-years-old, he is also three years younger than his current teammate.

That being said, considering the Heat’s lack of assets with favorable contracts, there is no doubt that they would be ecstatic to get an elite player such as Wall, despite his massive deal.

In the end, fans will just have to wait and see if team president Pat Riley and the rest of the Heat front office can strike a deal. With a record of 6-11, the 2018-19 season is at risk of being a major disappointment.

If the Heat can manage to bring an All-Star caliber player to Miami in the near future, it would certainly help turn things around.
[xyz-ihs snippet=”HN-300×250-TextnImage”]