Report: Miami Heat Could Trade for Jrue Holiday, Then Go After Giannis Antetokounmpo 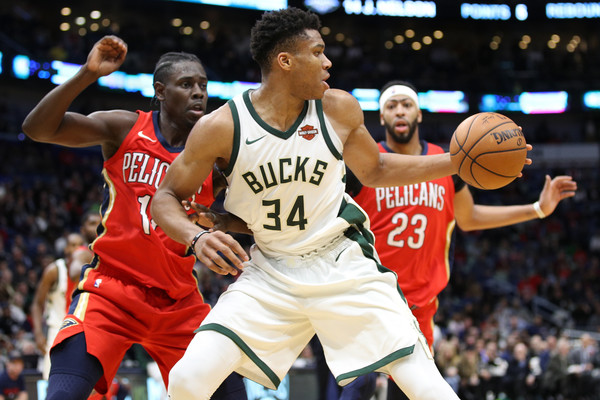 The Miami Heat are looking to make a push for another star player to turn themselves into true title contenders.

According to a recent report from Barry Jackson of the Miami Herald, the Heat may actually be looking to add a mega star both this season and next.

Jackson recently broke down how the Heat may look to both trade for star point guard Jrue Holiday in the near future and then also acquire defending MVP Giannis Antetokounmpo in the 2021 offseason.

“The Heat believes that even if it doesn’t have cap space, it usually can acquire any player who wants to be here,” he wrote. “(Exhibit A: Jimmy Butler, who was snagged despite Miami being well over the cap.)

“Even if the Heat acquires a quality player whose contract runs beyond 2021, thus leaving Miami well short of max cap space in 2021, there’s a solution to that in a few cases.

“If, hypothetically, Miami acquired New Orleans Pelicans guard Jrue Holiday — who has been linked to the Heat — and if the Heat learned in the summer of 2021 than Antetokounmpo wanted to come to Miami, the Heat could trade the final year of Holiday’s contract (if he exercises a $26.3 million player option for 2021-22) to a team with cap space for a player earning substantially less and a draft pick or merely a draft pick. Unless Holiday is seriously injured next season, that wouldn’t be a problem.

“And if Holiday opts out of his contract in June 2021, it wouldn’t be a problem because he could be renounced from Miami’s cap to make room for Giannis or anybody else Miami wanted to sign. FYI: I’ve done the math repeatedly, and unless Miami traded nearly all of its young players, there is no realistic path to having Holiday, Butler, Antetokounmpo and Bam Adebayo unless Giannis took a pay cut, which isn’t realistic.”

To be clear, it does not seem financially likely that the Heat would be able to acquire Antetokounmpo as well as retain Holiday, Jimmy Butler and Bam Adebayo.

That being said, if the Heat wanted to trade Holiday in order to make room for Antetokounmpo, it is highly like that they would be able to do so.

What this means is that if the Heat end up trading for Holiday prior to next month’s trade deadline, they would be able to use him in order to compete for a title both this season and next.

After that, if Antetokounmpo were to come to Miami, Holiday would be traded elsewhere and Antetokounmpo would become the unquestioned face of the franchise heading into the future.

Of course, this all coming to pass would be a dream scenario for Heat president Pat Riley and the rest of the team’s front office.

Knowing what Riley and company have been able to accomplish in the past when it comes to bringing stars to Miami, however, it shouldn’t be considered impossible to turn this dream into a reality.