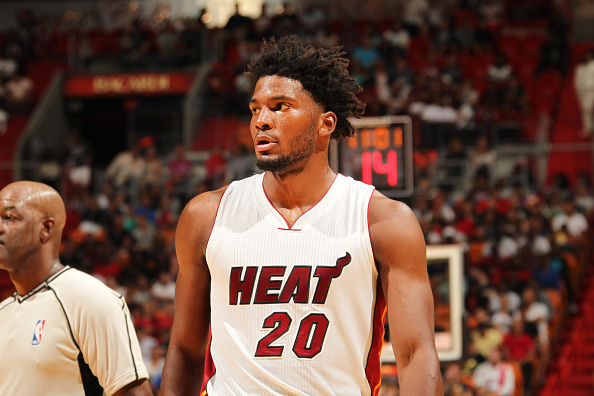 The Miami Heat have been doomed by the injury bug since the beginning of the season.

Two of the team’s starters, Justise Winslow (wrist) and Dion Waiters (groin), have been out of action for the past few games. However, Ira Winderman of the Sun Sentinel recently gave an update on when these two could return.

Waiters out at least another week-plus. Williams not in rotation. I would expect Justise. https://t.co/ELQx5YLTNZ

Winslow, 20, has already missed 11 games this season with a wrist injury, more than he missed his entire rookie campaign. The forward has been averaging 11.6 points and 4.7 rebounds in a team-high 35.9 minutes per game this season.

Waiters, who suffered a Pectineus tear last week, has missed the past four games and appears to be out for at least one more week. The six-year veteran is averaging 14.2 points on 38 percent shooting in his first season with the Heat.

Another key player who’s missed a good portion of time with the team is guard Josh Richardson. The sophomore missed the first five games of the season after partially tearing his MCL in early September. Despite coming back and playing 13 straight games, the backup guard had injured his ankle just before the Heat’s three-game road trip. Richardson was sent home by the team to receive treatment and is currently labeled as questionable moving forward.

INJURY UPDATE: Josh Richardson returned to Miami today for ankle treatment. He will be listed as questionable moving forward. pic.twitter.com/na5X4AV4Xh

In addition, Luke Babbitt, who was also absent during the Heat’s 99-92 loss to the Portland Trail Blazers on Saturday, has been diagnosed with a hip flexor. Fortunately, an MRI came back negative for the 27-year-old and he is optimistic to return to action soon.

The Heat return to the American Airlines Arena on Tuesday to face off the New York Knicks at 7:30 p.m. E/T.
[xyz-ihs snippet=”Responsive-ImagenText”]