Miami Heat Rumors: Heat in Play for Carmelo Anthony After His Trade to Hawks 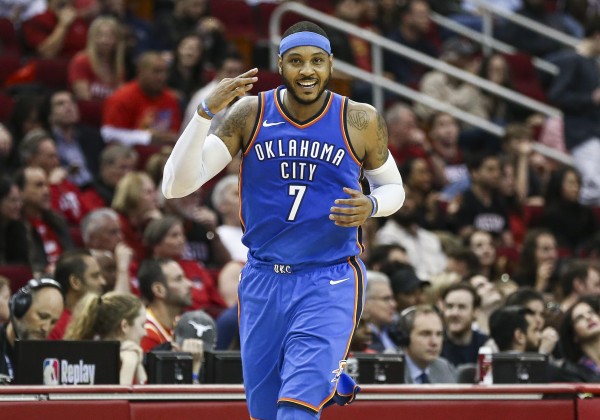 Follow a Thursday morning trade, Carmelo Anthony is no longer a member of the Oklahoma City Thunder. The former All-Star was traded to the Atlanta Hawks and it is believed that the move will ultimately lead to Anthony being granted a contract buyout for his $27.9 million salary for the 2018-19 season.

Once that takes place, and Anthony clears the NBA’s 48-hour waiver period, he will be free to sign with any team he chooses.

According to many experts, Anthony is most likely to end up playing for the Houston Rockets next season. Despite that, Ira Winderman of the Sun Sentinel believes that the Miami Heat would be a great option for Anthony.

“With the Heat, Anthony, 34, could have the opportunity to rebuild his value, possibly while starting at power forward, where James Johnson started at the end of this past season,” Winderman wrote.

“The Heat are limited in a bid for Anthony of the $2.3 million veteran minimum for a player of his tenure or the $5.3 million mid-level exception, a figure the Heat may have to retain for a potential return by guard Dwyane Wade.”

The Heat would not be able to offer Anthony a very lucrative contract. Though it stands to reason that the 10-time All-Star will not be making his decision of where to play based on his wallet thanks to his huge contract buyout.

Winderman went on to list even more factors that would make Miami an attractive option for Anthony, including his close relationship with Wade.

“A Heat agreement with Anthony could assure a Heat return by Wade, a close friend who currently is a free agent,” he wrote. “It also likely would lead to a return by Heat free-agent forward Udonis Haslem. Anthony, Wade and Haslem are represented by the same agency.”

Finally, he broke down why it would be advantageous for the Heat to pursue Anthony.

“One area where Anthony could boost the Heat would be his 3-point shooting, at least his volume of conversions, having made a career-high 169 last season,” he wrote. “In addition, with the Heat lacking a closer last season prior to Wade’s February return, Anthony closed last season ranked 12th in the NBA in one-on-one scoring last season according to Synergy Basketball.

“An addition of Anthony, could potentially serve as a bridge to the Heat’s next incarnation, at least from a marketing standpoint. The Heat received a boost last season when Wade rejoined the team at midseason, after time with the Chicago Bulls and Cleveland Cavaliers.”

It remains to be seen whether or not Anthony will truly test the market once he becomes a free agent. If he does, it seems quite likely that Miami will be very much in play.
[xyz-ihs snippet=”HN-300×250-TextnImage”]