Report: Goran Dragic Open to Trade Away From Miami Heat 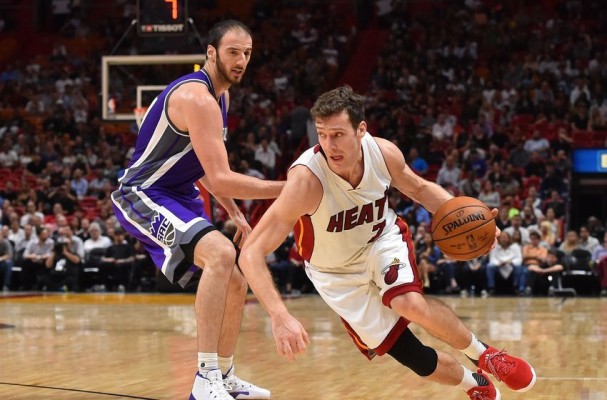 When Goran Dragic agreed to a five-year, $90 million contract with Miami Heat in 2015, the point guard was most likely expecting to help the Heat stay in contention with the Eastern Conference elites for years to come.

Instead, less than two years later, the 30-year-old is on a team that is third-to-last in the East and considered a long shot to make the playoffs. With the current reality, it’s no surprise that league sources are now telling The Vertical that Miami’s start point guard is being open to a trade:

“Dragic is open to a trade, league sources told The Vertical, and Miami has pursued that option. An early season swap with Sacramento for Rudy Gay fell apart when the Heat sought Darren Collison, sources said, and teams that have probed Miami about Dragic have found the Heat open to offers.”

While Dragic is putting up his best numbers in a Heat uniform — 19.1 points, 6.7 assists and a career high 4.1 rebounds per game — the guard simply hasn’t been able to propel his team to a winning season thus far. Ravaged by injuries, underdeveloped youth and minimal chemistry, the Heat are far from contending in the East anytime soon.

It is clear at this point that the nine-year veteran would much rather be on playoff-bound team than a lottery-bound team in the prime of his career. Going to a team like the Sacramento Kings, who are fighting to make the postseason, fits the bill for Dragic. Nonetheless, the starting point guard is making the best of his current situation as the Heat look to turn their season around after an underwhelming 9-20 start.
[xyz-ihs snippet=”Responsive-ImagenText”]