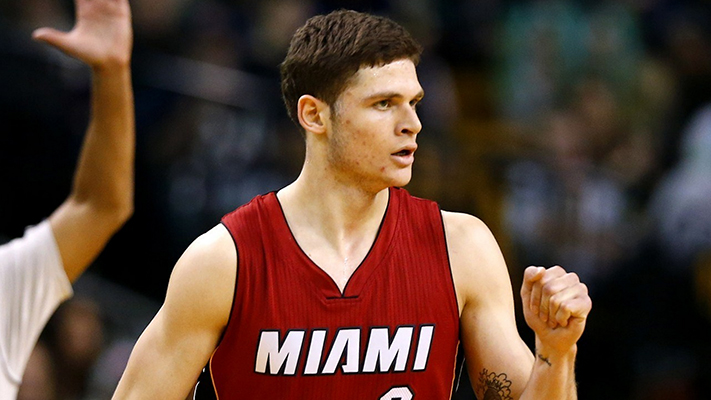 It appears that Tyler Johnson will be back with the Miami Heat next season, while James Ennis still remains a question mark.

Ira Winderman of The Sun Sentinel reports that Johnson will have his 50-percent contract guarantee picked up by the Saturday deadline and that the Heat are still mulling Ennis.

Have been told that Tyler Johnson will have his 50-percent contract guarantee picked up by Saturday deadline. Heat mulling Ennis.

After the Heat completed trades involving guards Shabazz Napier and Zoran Dragic on Monday afternoon, it became clear that Miami would have an open roster spot for the second-year Johnson for the upcoming season.

The 6’4″ guard didn’t make the active roster out of training camp last season, but was eventually called up to the main roster in January. He averaged 5.9 points and 2.5 assists in 32 games and two starts.

In the case of Ennis, things remain less clear.

The Heat waived Henry Walker on Monday afternoon, which might indicate that Miami plans on keeping Ennis around for another season.

However, they could very likely cut Ennis before his contract becomes fully guaranteed on August 1st. There have been rumors that former Heat swingman Mike Miller is interested in a return to the franchise where he won two championships.

In his rookie season, the 25-year-old Ennis averaged five points on 40.9 percent from the field in 62 appearances. He struggled to make a big impact despite being healthy for the majority of the season.

The Heat’s roster situation should become a lot clearer in the coming days as the August 1st deadline for guaranteed contracts approaches.
[xyz-ihs snippet=”Responsive-Ad”]