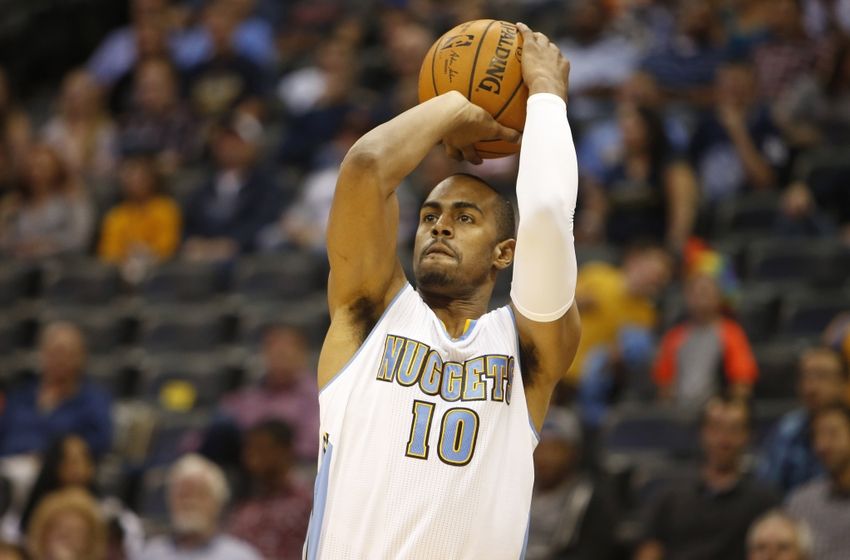 Could Arron Afflalo possibly be headed to the Miami Heat?

According to several reports swirling around the internet this week, the Heat are one of a handful of teams that have talked to the Denver Nuggets about the availability of the 6’5″ shooting guard, who is playing in his seventh year out of UCLA.

Since Mozgov trade, everyone is calling Denver on Chandler & Afflalo. Heard Heat, Clippers, Hornets have all discussed Afflalo.

Afflalo is averaging 15.5 points, 3.5 rebounds and 1.8 assists this season for the Nuggets. He is the team’s second-leading scorer behind point guard Ty Lawson.

Afflalo would provide much-needed depth at the guard position for the Heat, who currently do not have an effective backup for Dwyane Wade.

In fact, Coach Erik Spoelstra might choose to play Afflalo and Wade in the backcourt at the same time, since both are tall guards who can handle the ball and create plays for their teammates.

Spoelstra might also consider bringing Afflalo off the bench for forward Luol Deng, or play them together in the frontcourt alongside center Chris Bosh or the emerging Hassan Whiteside.

Bottom line: Afflalo’s size, athleticism and ball-handling skills make him a viable option as a starter or reserve for the Heat at pretty much every position except center.

And Afflalo is a relative bargain at $7.5 million this year, though the Heat would be on the hook for $7.36 million next season if he exercises his player option this summer.

The Los Angeles Clippers and Charlotte Hornets are also rumored to be in the Afflalo sweepstakes.

The Heat signed undrafted former Fresno State guard Tyler Johnson to a 10-day contract on Monday in their latest attempt to shore up their backcourt.

But unless Johnson breaks out in a big way, it is unlikely he is a long-term solution for Miami.

A complicating factor in the Afflalo discussions is the playoff positioning of the Nuggets and the Heat.

The Nuggets (17-20) are currently three-and-a-half games out of a final playoff spot in the Western Conference, but only two games behind the eight-seed Phoenix Suns in the loss column.

The Heat (16-21), meanwhile, have the seventh-best record in the East, but they have three games remaining on their current five-game West Coast road trip.

They will play the Los Angeles Lakers, Golden State Warriors and Sacramento Kings this week before returning to Miami for a matchup against the Oklahoma City Thunder next Tuesday.

So, with both teams in the hunt for the playoffs right now, we may have to wait until later this month to see whether the Nuggets or the Heat are buyers or sellers. The NBA trade deadline is February 19th.