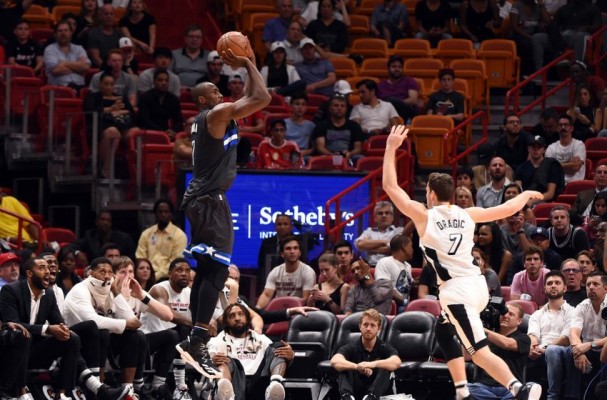 Miami Heat president Pat Riley has a couple of contingency plans set up going into this year’s free-agency period.

Most reports indicate that Riley’s Plan A will be to go after Utah Jazz small forward Gordon Hayward, who will meet with the Heat on Saturday at American Airlines Arena. If Hayward chooses to go with another team, the Heat will try to retain Dion Waiters and James Johnson, both of whom have expressed an interest in returning to South Beach.

But Johnson and Waiters will have other suitors on the market, and the Heat might not want to overpay for their services. If that is the case, one veteran big man on the market could become a target for the Heat: Serge Ibaka.

According to Ira Winderman of the Sun Sentinel, Ibaka has long held a fascination for the Heat because of an offensive game that takes opposing defenders to the perimeter and a defensive game capable of deterrence at the rim.

Ibaka was dealt from the Orlando Magic to the Toronto Raptors midseason last year, and the Raptors are expected to make a strong push to keep the 6-foot-10 power forward. Winderman also notes that if the Raptors lose point guard Kyle Lowry in free agency, they might be more willing to let Ibaka go to jump-start a rebuilding process.

The Heat are in a good position heading into the deadline, having scored an early meeting with Hayward, but if star free agents start signing deals elsewhere, Ibaka could rise quickly on the Heat’s priority list.
[xyz-ihs snippet=”Responsive-ImagenText”]