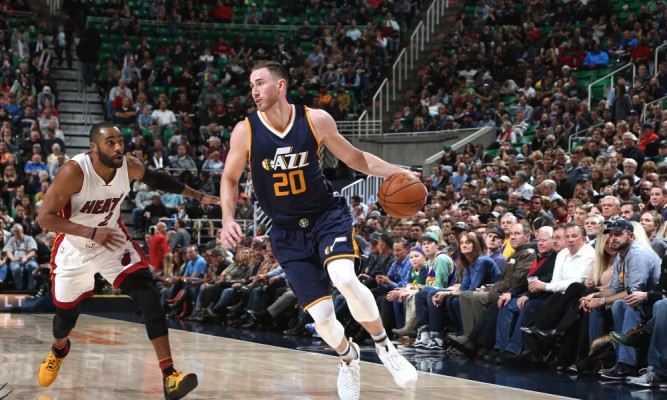 As the July 1 free-agency deadline approaches, the Miami Heat have already set up a meeting with one of the summer’s premier free agents.

According to Adrian Wojnarowski of the Vertical, Utah Jazz small forward Gordon Hayward has set up meetings with Miami and Boston after the start of free agency on Saturday. In the same article, Wojnarowski cited league sources that indicated Boston was planning a series of moves to acquire Hayward and Indiana Pacers superstar Paul George.

This report brings both good and bad news for Miami fans.

One one hand, a meeting with Hayward means Heat president Pat Riley will have an opportunity to sell the Butler University product, who averaged 21.9 points on 47.1 percent shooting last season, on bringing his talents to South Beach.

On the other hand, if Miami were able to convince Hayward to sign, most likely at his maximum salary of $29.7 million next season, it will severely limit its ability to bring back Dion Waiters and James Johnson. With the recent reports of a $99 million salary cap (lower than expected) for next season, a big-name signing will force the Heat to shed major assets in order to resign either Waiters or Johnson.

According to Barry Jackson of the Miami Herald, the Heat plan to go after Hayward and Blake Griffin to begin the free-agency period. If they strike out in signing those star players, they will turn their attention to bringing Johnson and Waiters back.