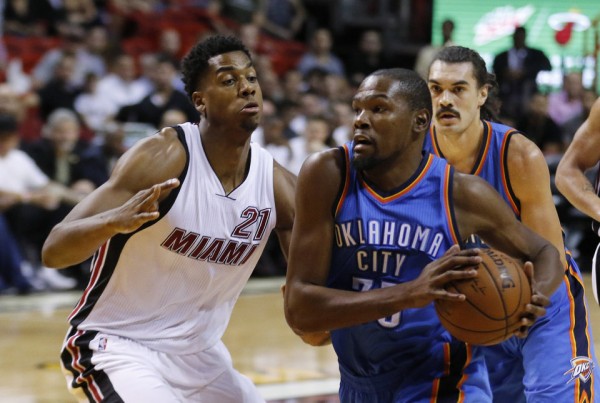 By now, most have heard that free-agent big man Hassan Whiteside has re-signed with the Miami Heat for a max deal worth around $98 million over four years. However, Ethan J. Skolnick has recently tweeted some interesting information about the deal:

New info on Whiteside deal: it’s not necessarily a 4 for $98M max. He agreed to some wiggle room if Durant wants to come.

It seems Whiteside is not as money hungry as some make him out to be. Obviously the 7-footer is receiving a great deal, regardless of what happens, but the fact that he is willing to leave some “wiggle room” for Kevin Durant is certainly a delight for Heat fans to hear.

Right now, it’s still looking like a long shot for Miami to sign Durant, but reports indicate that Pat Riley and the Heat will be the final team to meet with the Oklahoma City superstar, and as well all know, Riley is the ultimate closer.

As it stands, the Heat still needs to re-sign Dwyane Wade to satisfy the needs of its fans, but also to help lure in Durant by proving that the team can still be a legitimate contender in the East. If the team does indeed sign Wade, it will mean that it still needs to move some pieces around if it wishes to even have a shot at Durant.

According to Dave Hyde of the Sun Sentinel, Miami would probably need to trade Goran Dragic and Josh McRoberts to make cap room if it intends on signing Durant. While Dragic has had success in Miami (McRoberts not so much), one couldn’t really lament a decision that would send him packing in order to sign the most coveted free agent of the summer. While Riley is undoubtedly the master of getting deals done, signing Durant would certainly require some very careful dealings and maneuvering.

At the moment, though, Heat fans should be thrilled that Whiteside is willing to take less money to make room for a franchise-altering piece like Durant. This shows that the big man wants to win and is willing to do what it takes in order for his team to make the moves necessary to do so.
[xyz-ihs snippet=”Responsive-ImagenText”]