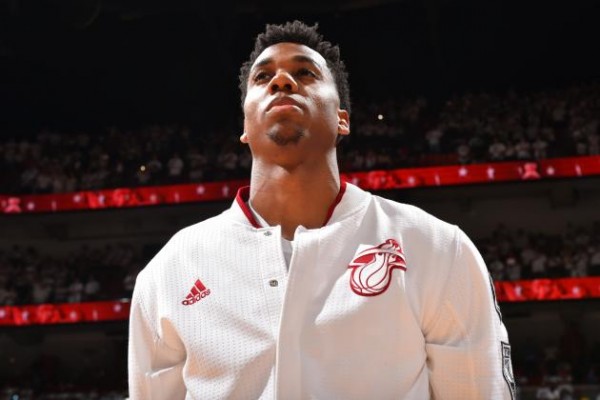 The Miami Heat have their hands full this offseason. They already plan on re-signing Hassan Whiteside and Dwyane Wade while also making a run for Kevin Durant. The problem is, money is tight in Miami right now.

Whiteside is almost guaranteed to sign a max contract wherever he goes. Though the Heat want him back badly, it may be tough to offer him what he can command from other teams while keeping any money left over for other free agents. Meanwhile, the Heat have to take care of Wade in a way that appeases his value without insulting him. The Heat have somewhere between $40 and $50 million in cap space and it looks like most of that must go towards Wade and Whiteside.

“If the Heat try to play games, sources close to the situation say Whiteside will go shopping. There is a sense that Whiteside is one of the top names on the Lakers’ wish list of free agents, with the Celtics also interested. The problem with trying to peg either as having some edge over the other neglects that Whiteside could be the most obtainable free agent in the class and likely gets a lot of interest beyond those two suitors. League sources said this weekend that Whiteside is getting a full max deal – the question is will it be from the HEAT or someone else?”

Reports largely indicate that Whiteside would love to get a deal done to stay with the Heat, but Miami needs to consider the rest of the roster as well. Whiteside’s value as a seven-foot defensive anchor and a shot-blocking machine is high right now. However, his overall worth will only increase as he hones his game further. He will turn 27 next Monday, which essentially puts him right in his prime heading into next season.

If Miami can get Wade to sign a deal worth a little less than he’s used to, that will leave more space for Whiteside, but after that, the Heat can only offer minimum money to other free agents. The entire free-agency process for the Heat this summer will require some very clever maneuvering by team president Pat Riley. If anyone can make it work though, Riley and company can.
[xyz-ihs snippet=”Responsive-Ad”]