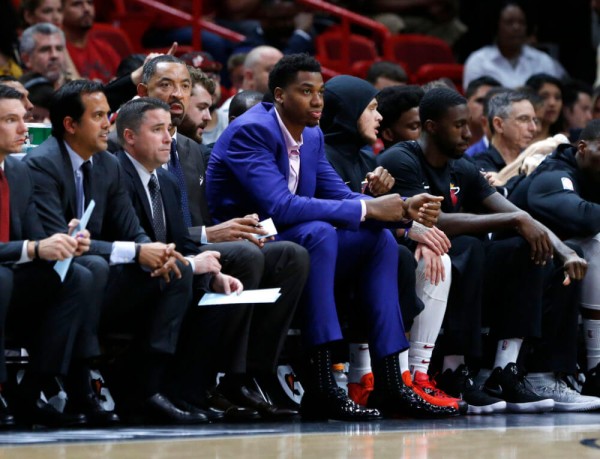 Miami Heat center Hassan Whiteside has certainly struggled to stay on the court so far this season and has missed the last eight games due to a lingering left knee bruise. According to recent reports, however, the talented big man is well on his way to returning to the court.

According to Anthony Chiang of the Palm Beach Post, Whiteside has taken a major step towards returning to action.

“The good news is that Whiteside, who will miss his eighth consecutive game and his 13th game of the season Friday due to a bone bruise on his left knee, is inching closer to a return,” Chiang wrote. “After being evaluated Wednesday night by team physician Dr. Harlan Selesnick, Whiteside was cleared to start working on the court.

“Whiteside didn’t go through the entire practice Thursday, but he participated in drills with a bulky brace on his left knee with assistant coach Juwan Howard and former Heat center and current team executive Alonzo Mourning watching on.”

Chiang provided proof that Whiteside has in fact taken the court on Twitter and offered an update from Heat head coach Erik Spoelstra as well.

Proof that Hassan Whiteside was on the court today. pic.twitter.com/pkZ3lhwsiJ

“This is the extent of what he was able to do today,” Spoelstra said. “He will not travel with us. This is his first court work and it’s good to obviously see him out here, but we’ll evaluate him after today and see if he can do more.”

The Heat have struggled to find a replacement for Whiteside since his knee forced him out of the lineup. Considering that he has averaged 14.9 points and 12.7 rebounds per game this season, it’s no surprise that Miami is struggling without him.

His ability to return to working on the court is certainly promising news, but it seems Whiteside still has to cross several thresholds before he is allowed to suit up. Hopefully all the news going forward continues to be positive as the 7-footer battles back from this latest injury.
[xyz-ihs snippet=”HN-300×250-TextnImage”]