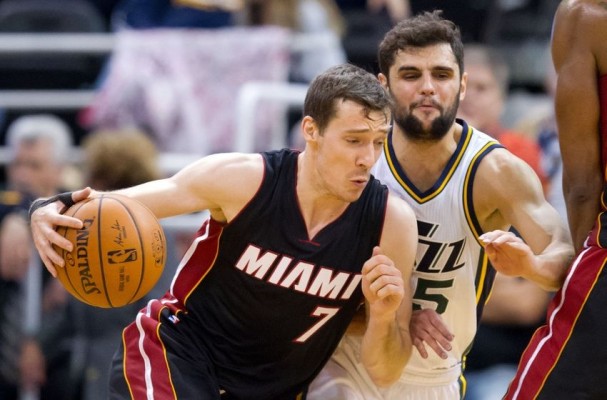 With the Miami Heat currently off to a 2-6 start in the 2016-17 NBA season, the likely prospect of rebuilding the franchise during the offseason is under consideration. One of the potential bargaining chips in that rebuilding process could be starting point guard Goran Dragic, who might be dealt for future draft picks according to Ira Winderman of the Sun Sentinel.

Pat Riley recently spoke with NBA.com on a variety of topics, with the subject of rebuilding being on that list.

“We have a pick this year,” he said. “I have intentions, if it’s possible, to try and get another pick.”

Interestingly enough, the Heat have just about every future draft pick encumbered, which means Dragic could be put into play for a 2017 first-round draft pick. Without giving any hints on a course of action or who he would trade to get a draft pick, Riley mentioned the players he’d like to build the team around.

“We feel that with Hassan (Whiteside), and with Justise (Winslow) and Tyler (Johnson) and Josh (Richardson), and some of the new guys who we got this summer, four or five of those young guys can create a nucleus,” Riley said. “We have a pick this year. I have intentions, if it’s possible, to try and get another pick. And then we will have room.”

Winderman pointed out that Dragic was conspicuously absent from that list and then further went on to say that the point guard would certainly bring a good deal in return, considering the Heat gave up two future first-round picks of their own to get him as part of a three-team deal from Phoenix in February 2015.

Miami watched Dwyane Wade walk away during the free-agency period, and was essentially forced to retire Chris Bosh after repeated health scares with blood clots. They have nothing to show for those two key departures, so infusing the team with new blood will undoubtedly require some pain this season.

The Heat have a busy week ahead of them, with a road game in San Antonio on Monday night, home clashes against Atlanta on Tuesday and Milwaukee on Thursday, and a Saturday away game in Washington.
[xyz-ihs snippet=”Responsive-ImagenText”]