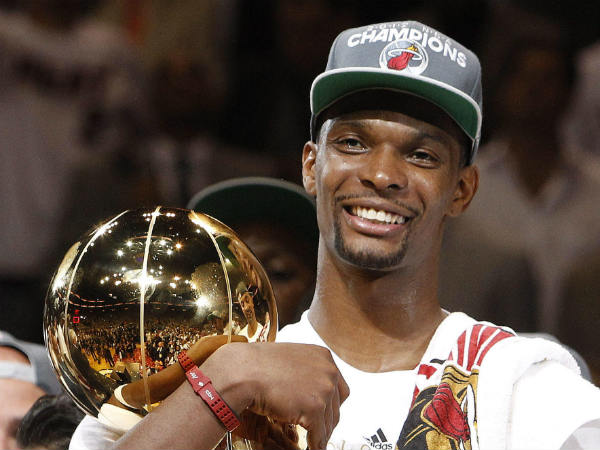 Sure, Dwyane Wade had to sacrifice his very own team and hand over the keys to LeBron James, but no one has been just swept under the rug on a day-to-day basis as Chris Bosh has.

Chris is currently raking in $19,067,500 as his annual salary for the 2013-2014 season, the equivalent of LeBron’s salary, and slightly more than Dwyane’s. Yet, no one amasses Bosh’s skill level to that of LBJ’s or D-Wade’s.

Maybe we’ve all forgotten that Chris was an all-star before he teamed up with the Big Three. Perhaps it’s slipped our minds that Chris was putting up 24 points, 10.8 rebounds on a torrid 51.8% shooting clip in his last year with the Toronto Raptors.

Whatever it may be, the numbers, and results cannot be ignored. Bosh has easily been an integral part of Miami’s recent championship run and if the Heat are to have any chances of keeping LeBron and the core of their Big Three intact, it all starts with Chris Bosh.

As you may already know, both Bosh and James have the options at the end of this 2013-2014 campaign to opt-out of their contracts and become free agents, enabling them to join any team of their choosing.

We’ve yet to hear the slightest hint from James as to where his favorable destination may be, but recently, Chris Bosh was interviewed by Dan Le Batard on ESPN Radio where Le Batard asked Bosh if he would “take a discounted rate to stay in Miami.” Bosh responded with, “If that’s what it takes, yeah…I love it here, I don’t want to go anywhere.”

If you’re a Heat fan, that is some fantastic news. However, please take notice that Bosh proclaimed at the beginning of the season that a third-straight championship would be a large factor in deciding what free agency would look like for the Big Three.

Ethan Skolnick of Bleacher Report states that Miami’s dismantling will depend largely upon what LeBron James decides to do. Because if LeBron leaves, Bosh is gone as well. However, according to Skolnick, most Miami Heat teammates believe James and company are likely to stay put.