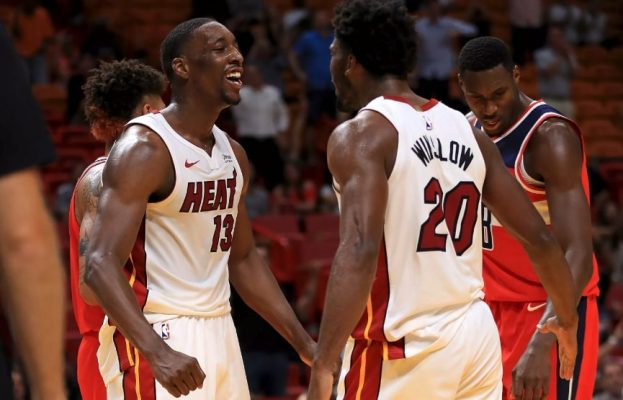 Miami Heat center Bam Adebayo is currently preparing for his third NBA season and is also hoping to earn a spot on the Team USA squad that will compete in the FIBA Basketball World Cup.

A new report indicates that his continued development and ability to serve as a complementary player to teammates are why the Heat have thus far rejected trade inquiries directed at the big man.

Ira Winderman of the Sun Sentinel answered a question from a fan who asked if Adebayo’s potential berth on the Team USA team makes him a viable trade candidate for Washington Wizards guard Bradley Beal:

“Just as USA Basketball needs supporting players, so will the Heat if/when they get their running partner alongside Jimmy Butler. It is among the reasons for the reluctance to part of Bam in trades. That said, the invitation to USA Basketball camp certainly can’t help but open eyes, and therefore increase Bam’s trade value — just in case.”

While Adebayo has shown plenty of promise during his young NBA career, his individual statistical averages of 8.0 points, 6.5 rebounds and 1.9 assists don’t particularly stand out. However, more subtle numbers regarding areas like his success with defensive switches and effective screens set are important from a team outlook.

The addition of Butler was a major one for the Heat, though it came at the cost of another key young player, Josh Richardson. The reported pursuit of other players such as Beal and Chris Paul are clear signs that the Heat are looking at things from a more short-term perspective. Acquiring another key piece of the caliber of Butler could mean that Adebayo is dealt, but the Heat are hoping to avoid trading away another young talent.