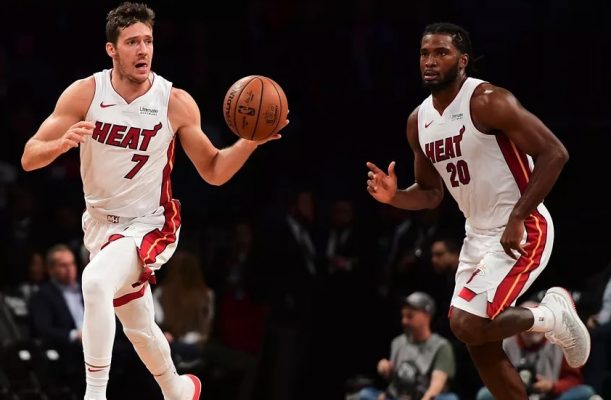 Recently, Justise Winslow made it clear that he intends to play point guard for the Miami Heat this season.

While he did not overtly say he is gunning for the starting job, he certainly alluded to it.

That desire hasn’t changed the mind of the Sun Sentinel‘s Ira Winderman, however, who still believes veteran Goran Dragic will end up claiming the starting point guard spot.

Winderman said as much when answering questions he thought were pertinent to the onset of Miami’s 2019-20 season.

“As I’m sure Erik Spoelstra will stress the next time he is in front of a microphone, don’t overstate the starting lineup,” he wrote.

“Spoelstra’s lineups have routinely been fluid at the start of seasons and there certainly will be ample permutations with this group.

“Personally, I would stay with Dragic in the first five, because last season’s lottery finish can directly be tied to his extended absences. But many around the Heat believe the this is Winslow’s time and that there could be value in saving Dragic’s legs at age 33.”

As Winderman points out, an argument can be made for either player.

Last season, Winslow played admirably when he was asked to slide into the starting role after Dragic went down with an injury. He showed glimpses of genuine star potential on several different occasions and enjoyed career-high averages of 12.6 points and 4.3 assists per game.

Beyond that, Winslows 6-foot-7 frame helps Miami play position-less basketball, something that will likely be quite important when going against top teams in the NBA.

As for Dragic, he was the lone player on the Heat’s offseason roster with an All-Star game appearance prior to the trade for Jimmy Butler. Still, he did only manage to play in 36 contests last season due to injury, and when he did play, he averaged just 13.7 points and 4.8 assists per game.

If Dragic is to claim the starting spot and his numbers are similar to what they were last season, it is likely that Spoelstra will opt to give Winslow, who is just over 10 years Dragic’s junior, the nod.

Whatever happens, it’s players like Dragic and Winslow who are going to have to play up to their potential if the Heat have any hope of competing for the top spot in the Eastern Conference.