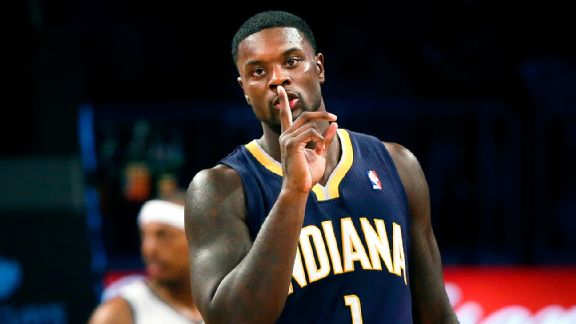 Maybe he likes the attention, maybe he feeds off the drama, or maybe he just doesn’t know any better. In 2011, Stephenson gave LeBron James and the Heat the infamous “choke” signal after LeBron missed a technical free throw.

Earlier this year, Lance stared down Dwyane Wade and exclaimed, “WHAT!” after a made basket. Now, reports have it that the young mischief is at it again.

The following is in accordance with the Palm Beach Post:

Looking ahead to his matchup with Wade, beginning in Game 1 of the Eastern Conference Finals on Sunday (3:30 p.m., ABC), Stephenson revealed that making Wade’s problematic right knee “flare up” is part of his strategy.

“D. Wade — I think his knee is messed up, so I’ve got to be extra aggressive and make him run and have him running around and make his knee flare up or something,” he said after the Pacers practiced this afternoon. “I’ll do anything as much as possible.”

Wade’s knee appears to be doing well after a season-long maintenance program to preserve it. He also seems to have fully recovered from the strained hamstring he suffered in late March. He played through an unspecified injury in his right hand in the second round against Brooklyn and says it is a non-issue.

Miami plays the Indiana Pacers Sunday at 3:30 PM E/T and it will be interesting to see how Wade responds. If history is of any reliable indicator however, Wade will simply let his game do the talking.