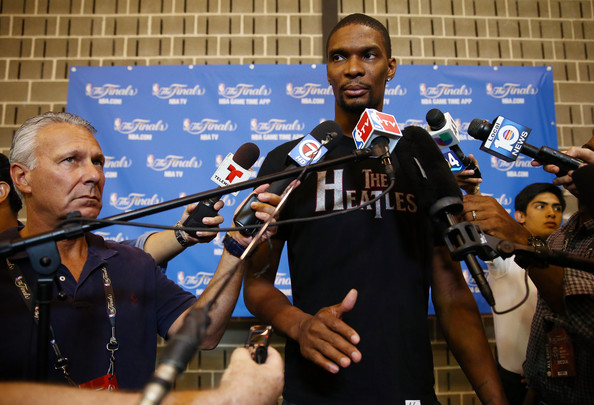 So approximately one day after sources said that the Miami Heat front office and its players were planning to clear cap space for New York’s Carmelo Anthony, it looks like the rumor has been debunked for the time being.

Miami Herald’s Barry Jackson interviewed forward Chris Bosh today asking him about the chances of luring in Anthony. Bosh responded with, “It’s very, very unlikely.” As a matter of fact, Bosh even stated that the team hasn’t even discussed the signing of ‘Melo yet.

Being in the midst of an NBA Finals, it’s understandable why the Miami Heat have opted not to discuss any free-agency related matters at the time being.

However, Udonis Haslem sees the acquisition of Anthony a little differently. “It doesn’t seem unrealistic,” he said today. “There was a time nobody would have thought you could put this team together, with those guys taking pay cuts, and even myself taking a pay cut. You can never say never.”

With what happened in 2010, it’s true, that with the team in the hands of Pat Riley and Micky Arison, the phrase, ’never say never’ should always be applicable. Hopefully the noise from the outside are not keeping the Heat from focusing on its main prize, a third straight Larry O’Brien trophy.