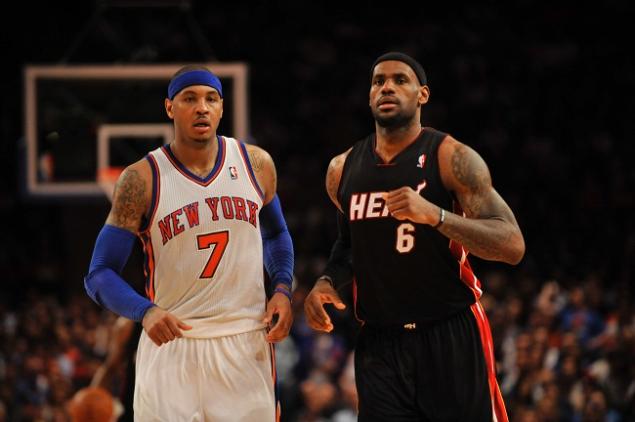 About a week ago, we reported that Carmelo Anthony ending up on the Miami Heat was a definite possibility. Well, now sources are reporting that the Heat’s front office and players are actually starting to plan their map of attack in the realistic acquisition of Anthony.

In order to clear enough cap space to sign Anthony, Miami’s Big Three would need to all opt out of their contracts at the end of this month and resign with even lesser money than when they first signed with the Heat. According to Brian Windhorst of ESPN, we’re talking about tens of millions of dollars that the Heat’s Big Three could be losing long term.

Anthony has until June 23 to notify the New York Knicks of his intentions. But with Pat Riley and Micky Arison behind the scenes, there’s no telling what could come about.

The deciding factor will ultimately come down to Miami’s own LeBron James, however. LeBron has the option at the end of this month to stay a member of the Heat for one final year, or to opt out and become a free agent, which in turn could lead to a paycut and the eventual signing of Anthony.

However, the one thing holding Melo from signing with the Heat could be Knicks president Phil Jackson, who has been urging Anthony to put off unrestricted free agency one more year and opt into one more season with the Knicks for $23.3 million. Of course, this is all part of New York’s plan of luring James to New York in 2015, where both LeBron and Melo would be unrestricted free agents.

The full video is below: