Don't Miss
Home / Media / Udonis Haslem: ‘Whoever I Play Against Is Gonna Get Hit’

Udonis Haslem: ‘Whoever I Play Against Is Gonna Get Hit’ 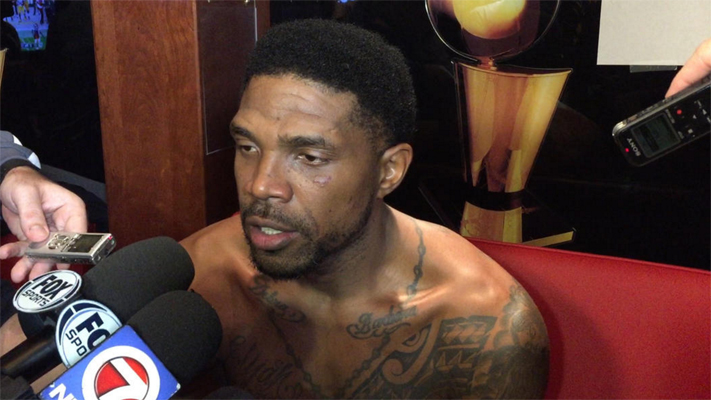 With Miami Heat center Hassan Whiteside sidelined with a knee injury, other players are going to have to step up and make up for what the center usually brings.

One aspect that won’t be missed is physicality. In fact, there may be more to see with longtime big man Udonis Haslem likely to register big minutes tonight.

According to Jason Lieser of the Palm Beach Post, the veteran had some strong words following Game 3:

“It’s not like I’m looking at it like, ‘Oh, I’ve gotta go hit Valanciunas,’” Haslem said. “I’m a competitor every night, so whoever I play against is gonna get hit. That’s just how it’s gonna be…Whoever’s out there, it’s gonna be a physical game. Once the shot goes up, bodies are gonna collide.”

The 35-year-old is the heart and soul of the Heat alongside Dwyane Wade. Haslem has been known to be an enforcer, a physical force and someone not to be messed with it, with plenty of history to show for it.

Before Toronto Raptors big man Jonas Valanciunas was declared out for the rest of the series, Haslem got into the young center’s head and troubled him early on in Game 3. The 13-year veteran had his best game of the playoffs in the outing, going for eight points, seven rebounds and two assists in 22 minutes.
[xyz-ihs snippet=”Responsive-Ad”]