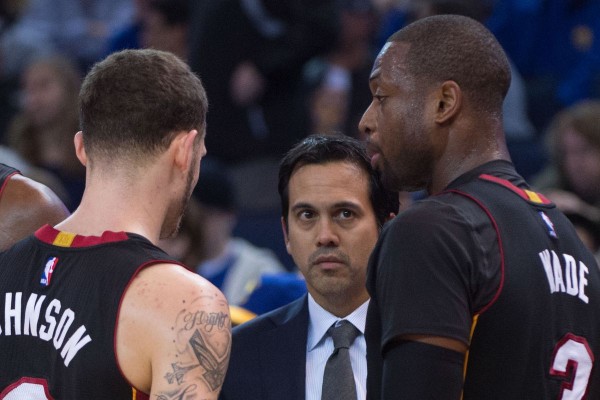 When Dwyane Wade was traded to the Miami Heat just hours before the NBA trade deadline, players and fans alike knew that the Heat were getting one of the most valuable veteran presences in the NBA.

According to Tom D’Angelo of the Palm Beach Post, Wade and fellow Miami veteran Udonis Haslem sat down with Heat guard Tyler Johnson on a flight to All-Star Weekend to discuss his recent struggles, and how to approach the final two months of the season.

Prior to Saturday’s win over the Memphis Grizzlies, Johnson had struggled in the 11 games since returning from an ankle injury. He was averaging just 9.7 points on 39 percent shooting from the field. Thankfully, Haslem and Wade, who Johnson calls ‘my boss,’ took the flight as an opportunity to remind the 6-foot-4 guard to just be himself.

“He’s a big part of what this team is made of. He’s a tough guy who can get up and down, plays above the rim, also can shoot outside. So, his game has really developed and this team needs it. Needs Tyler to be aggressive like that and play his game.”

That aggressiveness finally revealed itself in Saturday’s blowout win over the Grizzlies. Johnson scored a game-high 23 points. He shot 50 percent from the field and five of his 12 attempts in the game came from five feet or less. Prior to Saturday’s game, just 26 of his last 100 shots had been that close to the rim.

“He was so aggressive and he was like a blur going to the rim,” Heat coach Erik Spoelstra said following the tame. “That’s the Tyler we saw before the injury.

“He probably needed that All-Star break as much as anybody just to have those days off and let his body rest.”

Johnson credited Wade and Haslem with helping him take a step back and take advantage of the All-Star Break to get his season back on the right track.

“It was more for my mind,” he said. “It was more of a good thing to just get away, enjoy time with family, enjoy watching my teammates do what they do. I was out there in L.A. for a little bit.

“Usually when I go through a stretch where I’m not playing well I try to put it into overdrive and kind of will it. (Wade and Haslem) were telling me to kind of just get away and clear my mind.”

Hopefully the Johnson we saw on Saturday is here to stay. Despite the victory, the Heat have lost eight of their last 10 games and are currently fighting to hold on to the eighth and final playoff spot in the Eastern Conference. If Johnson can continue that kind of aggressive and productive style of play, there should be many more victories on the horizon.
[xyz-ihs snippet=”HN-300×250-TextnImage”]