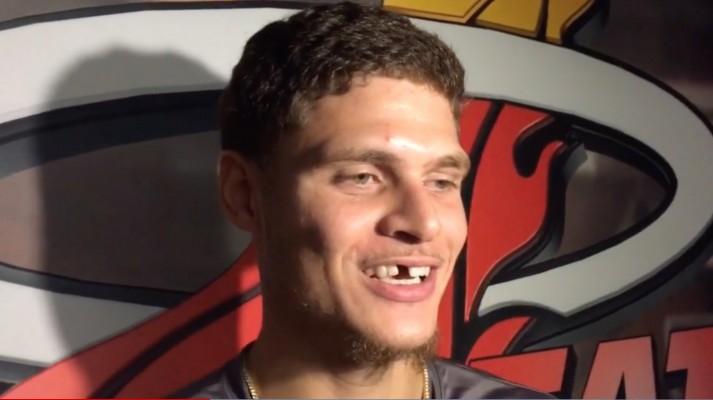 Tyler Johnson‘s toothless grin became famous last season, and while he promised he would get a replacement tooth during the offseason, the noticeable gap still remains.

In an interview during the Miami Heat‘s youth camp at Miami-Dade College, Johnson answered questions about his signature smile, saying that while his mother has been clear about wanting him to replace the missing tooth, he’s having second thoughts.

“I don’t know, my mom’s been pushing me, too. So I think she might be the one to finally get me to get one,” the young guard said of his missing tooth. “I just don’t see why it’s necessary right now, because I’m sure eventually it’s going to get knocked out again. I mean, if I play 10 years in the NBA I’m pretty sure I’m going to lose it two, three more times. So if I leave it out now, then I just got to get one.”

He was then asked to recount all the times he’s lost teeth in the past.

“I had one incident in college where I dove on the floor, somebody fell on top of the back of my head and all my teeth went into the court so I lost like five or six at that time,” he recounted. “And then when I broke my jaw that was the seventh.”

If the past predicts the future, Johnson will likely be proven correct in his assumption that replacing the tooth will be useless until he retires from the NBA. So, it looks his famous gap-toothed smile might be here to stay, much to the chagrin of his concerned mother.
[xyz-ihs snippet=”HN-Native-EndofArticle”]