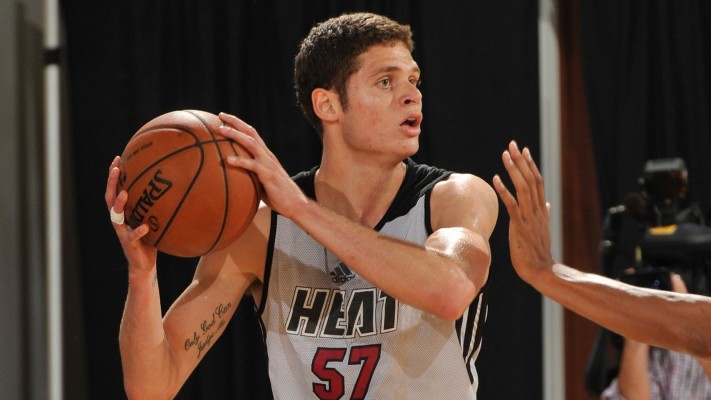 It has been quite the summer for Tyler Johnson.

In the definition of an up-and-down summer, the 23-year-old is about to enter his second season with the Miami Heat. A little over a month ago during a summer league game on July 8th in Orlando, Johnson suffered a fractured jaw while fighting through a normal screen play.

The injury required surgery and has prevented the young guard from practicing on the court. Johnson spoke for the first time since the impairment while participating in the NBA Rookie Transition Program in New York on Wednesday:

“I had two plates put in. The fracture happened at two parts of my jaw. So I fractured it on one end and then it came out the other end. That’s where my tooth fell out. So two plates were put in.”

Though the 6’4″ guard is in the midst of recovering from the injury, the Heat clearly have confidence in their young project as they traded away both Shabazz Napier and Zoran Dragic in luxury-tax selloffs on July 27. Later that week, half of Johnson’s $845,059 salary for 2015-16 was guaranteed by the team.

The Fresno State product stated that the franchise has confidence in him considering they have kept him around:

“If they keep you around and keep you on their team, that means that they have faith in you. You can read into that by the action.”

Johnson did not initially make the team’s roster at the beginning of last season, but was eventually called from the D-League in January. From that point on, he became a member of the rotation and averaged 5.9 points while playing in 32 games with two starts.

As he embarks on his second season in the NBA, Johnson commented on his progress in recovering from his injury:

“I have probably my last doctor’s appointment at the end of the month, and then, hopefully, we can make an estimate of when I can play full contact again. I’ve been able to run and getting on the exercise bike. I was able to do that fairly quickly. They wanted me to stay off the court for at least four weeks after. So when I get back will probably be the first time I start back to getting into the gym and working out again.”

After the trades of Napier and Dragic, Johnson looks to be the primary backup at point guard entering the 2015-16 season for the Heat.
[xyz-ihs snippet=”Responsive-Ad”]