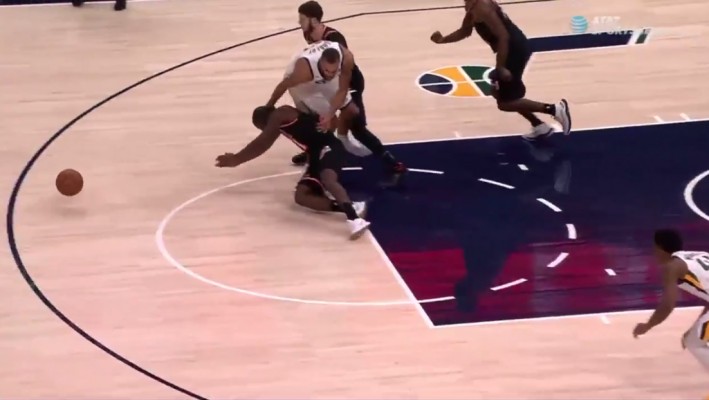 Miami Heat shooting guard Dion Waiters was the story in the team’s 84-74 road win over the Utah Jazz on Friday night.

Waiters finished with a game-high 21 points on 50 percent shooting from deep. The sixth-year pro dominated the Jazz down the stretch, scoring 10 of Miami’s final 13 points in the last 4:45 of the game.

While the 25-year-old’s stellar scoring headlined the game, it now appears something else is taking away Waiters’ shine. After the game, Jazz center Rudy Gobert claimed that the Heat’s guard had other intentions when diving for a loose ball in the third quarter that left the big man injured and out of the game for a few minutes.

Dove for the ball right… https://t.co/0xnXZVy2eG

The French big man believes that Waiters purposely dove directly into his knee. He had more to say to reporters following the contest.

“He just dove right into my knee,” Gobert claimed afterward, according to the Deseret News. “Kind of like the same thing that happened before on my MCL, so my knee just went inside and kind of popped inside and back out.”

After reviewing the tape, Gobert reaffirmed that the guard committed a “dirty play” in the scramble.

“It feels better than it looked on the video,” he said. “I think it was a dirty play, but no matter what the most important thing is to keep getting better.”

Gobert has had knee issues in the past, so it’s understandable why the center would want to protect his body as he is coming off a career season. Last year, the 7-footer averaged 14.0 points, 12.8 rebounds and a league-leading 2.6 blocks.

Waiters, too, is coming off a career year and is looking to build on that campaign as the fourth-pick in the 2012 NBA Draft is putting up a career-best 16.4 points on 43.3 percent shooting also a career-high 80.0 percent from the free-throw line.
[xyz-ihs snippet=”Responsive-ImagenText”]