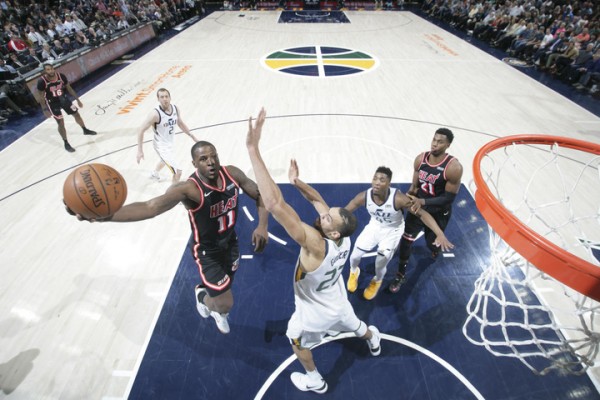 (Salt Lake City, UT) — Scoring the final 13 points of the game helped the Miami Heat come away with an 84-74 victory over the Utah Jazz at Vivint Smart Home Arena on Friday night. Dion Waiters was the centerpiece of that late run, scoring 10 of those points by sandwiching a pair of five-point spurts in between a Josh Richardson 3-pointer, which allowed the Heat to even their season mark at 6-6.

The Jazz had led 74-71 with just under three minutes left when Waiters drilled a 3-pointer with 2:45 to go. He followed that up with a jumper just 36 seconds later. After Richardson hit his three with 1:27 to go, another trey and a pair of free throws by Waiters closed out the contest.

“This was the modern space-and-pace game tonight,” Heat head coach Erik Spoelstra said after the game. “We knew coming in that this was going to a completely different game than the Phoenix game. At times it felt like it was being played in the mud.”

Waiters led the Heat with 21 points, with Goran Dragic contributing 18, Tyler Johnson scoring 11 and Hassan Whiteside nearly offering up another double-double. The big man concluded his night with eight points, 20 rebounds and a trio of blocked shots.

“I would say Hassan’s eight-point game was one of the most inspiring games he’s had in a Miami Heat uniform,” Spoelstra said. “He really anchored our defense.”

Whiteside spoke after the game about what he feels his job is on the court.

Yet the real story for the Heat on the night was their second-half defense, which limited the Jazz to just 25 points. Utah hit on 34 percent of their field goals for the game, but connected at just a 12 percent rate (4-for-33) during the final two quarters and missed all 14 of their three-point attempts.

That shutdown began when the two teams returned from intermission and the Heat trailed by a score of 59-47. The Jazz managed to score just eight points during the third quarter and even more embarrassingly, made just one field goal in 18 attempts. That helped play a part in helping the Heat score the first 11 points of the period. However, Miami missed a golden opportunity to take control of the game by committing nine turnovers during the quarter, which ended with the score deadlocked at 57 apiece.

“The first half, they scored too many points,” Dragic said. “When we came to the locker room at the half, we said we have to be more aggressive.”

The Jazz led for most of the first quarter until the Heat managed to finish off the final 3:30 with a 12-4 run. The focal point of that surge was 10 unanswered points by the Heat, who were mainly powered by Johnson’s seven points off the bench during this portion of the period. Johnson’s 3-pointer from the right side helped cap the 10-0 run and played a key role in helping the Heat take a 25-22 lead into the second quarter.

During that next period, the Miami shooting touch almost completely disappeared. The Heat scored just 12 points and shot a horrific 16 percent (3-for-19) from the field, which helped put them on the receiving end of a 16-2 run by the Jazz. Utah was able to put together this push in just over three minutes, primarily due to the four 3-pointers and ended up taking a 49-37 lead into halftime.

“We were flat the entire first half,” Spoelstra said. “So the 12-point lead felt like a 20-point lead, just because we didn’t get our defense established the entire 24 minutes. We looked a lit bit more like ourselves in the second half.”

The Heat concludes their six-game road trip with a Sunday afternoon game against the Detroit Pistons. Tipoff for that game will be just after 4 p.m. ET, with the Heat’s next game at American Airlines Arena coming on Wednesday night when they host the Washington Wizards.
[xyz-ihs snippet=”HN-300×250-TextnImage”]