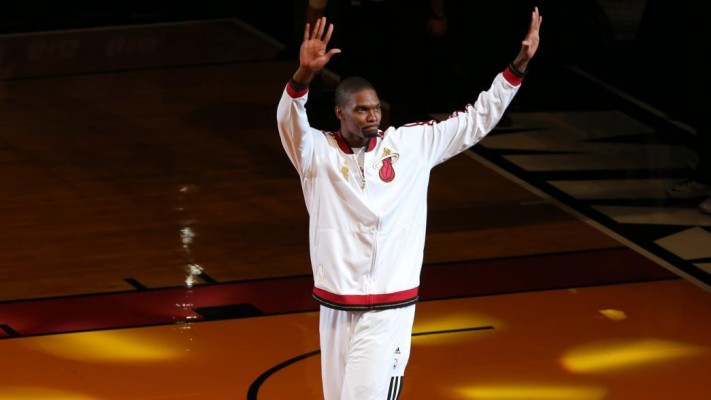 Five days after Chris Bosh was officially waived by the Miami Heat, the two-time NBA champion and 11-time All-Star took to his website to pen a letter to the players, coaches, and people of Miami that helped him along the way during his six seasons there.

Bosh admitted that part of him was reluctant to leave his previous team, the Toronto Raptors, but that reluctance soon turned into acceptance as Miami became more of a home to him than he could have ever hoped for.

“It was scary leaving Toronto, a place where people really loved and supported me, and I wasn’t sure if that great feeling would follow me,” Bosh said. “When I arrived in Miami, I was just hoping for glory and mention amongst the immortals of basketball. What I got was so much more.”

The power forward went on to talk about the highlights of his time in Miami, including the birth of his son during the 2012 NBA Playoffs, where he nearly missed a playoff game against the New York Knicks.

“I made it to the game right as [Erik Spoelstra] was giving his pre-game address. The guys all saw me come in and started clapping while they gathered around and hugged me,” he remembered. “It felt like a scene out of a movie. The guys in that locker room always made me feel special.”

He recounted the lowlights, discussing in the detail what if felt like to be told that his career was in serious jeopardy after doctors found blood clots in his lungs.

“And then came not being able to play the game I love, the game that I’ve spent a lifetime working to master and evolve with and find success in. I was very upset for a long time,” Bosh said. “Learning that information about my health during All-Star Weekend was extremely tough, especially during a time of celebrating the league and its great players and fulfilling dreams.”

We went through life together, Miami. Read my thank you to you here- https://t.co/8xKXV60fCU pic.twitter.com/r382PF2ltt

Bosh also hinted at his belief that his career is not yet over, that he can come back to compete at an elite level as a different kind of basketball player. He pointed to his selection to the 2016 Three-Point Contest as a sign that he was turning a new leaf.

“It felt like my reintroduction to basketball as a different player, being able to evolve into something else and still be successful. I have yet to fulfill that part but that’s to be continued,” he said.

He concluded, however, with expressing his newfound understanding of the game, and life. Saying that no matter what his future holds, he knows Miami is a place that he can call home.

“People will always see the trophies and banners and think that’s the whole story. But it’s only a piece, only a moment in time. I’ve learned that no matter what happens on the court, the game continues,” he poignantly wrote. “We went through life together, Miami. You showed me how to stay strong and push through in the toughest moments. And although I didn’t like it at the time, it made all the difference in the long run. It made me a better man, the person I am today. Thank you.”

With words from the heart like these, it is no surprise that Bosh has become one of the most beloved Heat players in recent memory. While he joined the Heat as just one piece on a team that would go one to bring home two NBA championships, he’s leaving as so much more.
[xyz-ihs snippet=”HN-Native-EndofArticle”]