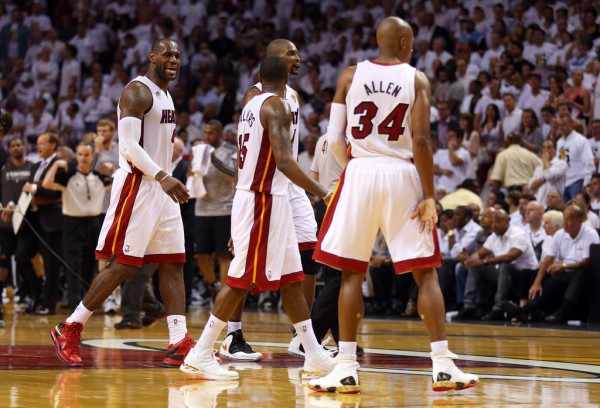 Last week, Cleveland Cavaliers guard Dwyane Wade publicly shared that the Miami Heat‘s last season with the Big 3 was a “failed marriage.” Furthermore, the former Heat superstar stated that the Heat shouldn’t have reached the NBA Finals during the 2013-2014 NBA season.

“That last year in Miami when we went to the Finals, I don’t know how we made it,” Wade said. “As a team, we were kind of like this. It was worse because it wasn’t new guys, it was guys who had been around each other for four years in a row. So the jokes weren’t funny anymore. You know, you walked in, it wasn’t a big smile no more. Guys was just over you, it was being in a bad marriage. But we somehow made it to the Finals. Indiana should have beat us, but we had a mental edge over those guys. We shouldn’t have been there. It’s tough, definitely, and that’s why it hasn’t been done a lot.”

After beating the Indiana Pacers in six games, the Heat got dismantled in the NBA Finals by the San Antonio Spurs in just five contests. One month later, LeBron James took his talents back to Cleveland, putting an end to the Heat’s prolific four-year run.

Now, another popular guard who played on the team is speaking out. All-time leading three-point shooter Ray Allen backed Wade’s comments on the Big 3’s last season together in a interview with Sports Illustrated.

“It certainly was tough on all of us as players,” Allen said of the Heat’s failed bid for a third consecutive championship. “Organizationally, I don’t think they ever adjusted. Most of the guys, having gone to so many Finals, me being an older player, having played a lot of basketball the last five, six years, organizationally and coaching wise they didn’t adjust.”

That season marked the last one for Allen too, who played a whopping 18 years in the league.

“We had the oldest team in the NBA, and on top of that, we had such a bad schedule. Every holiday we were away from home,” Allen said. “Every situation we were in we were fighting to just stay above board, trying to figure out how to sleep or rest our bodies. We wore down, we were tired, and we were definitely tired at the end. We still were good, and we still made it to the Finals.”

Allen was in fact the oldest player on the team at age 38. Still, the 6-foot-5 shooting guard played a whopping 73 games while putting up 9.6 points per game.

“With a team as old as we were, and with as much basketball as we’d played, we were still doing a million appearances, we still were having all the practices, and doing all the things that typically wear you down by the end of the year. Just being on your feet so much.

Despite the bad ending, the Heat have tons of great memories to look back on with Allen. Headlined by his game-tying 3-pointer against the Spurs during Game 6 of the 2013 NBA Finals, the NBA legend had terrific two-year stint with the Heat.
[xyz-ihs snippet=”Responsive-ImagenText”]