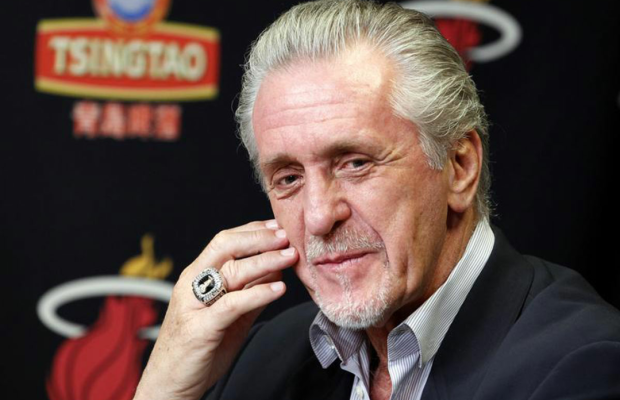 Pat Riley spoke with two writers today and gave his take on LeBron’s departure, Dwyane Wade, the signing of Chris Bosh, and Miami’s plan for the future.

Riley, on losing LeBron, “It was a tough blow to take, but we’ve recovered very well, and I think we will continue to recover.”

Pat Riley on LeBron’s decision: “Like Micky said, both of us were shocked. But you know, you recover.”

Riley on LeBron at the start of free agency, “I went in with the notion that he was coming back. So I was selling it to players.”

Riley on possibly being hurt by LeBron’s relocation, “I don’t get hurt. . . . This is business, all business.”

Riley on leaving Vegas thinking LeBron would stay, “There wasn’t anything in that meeting that told me that wasn’t going to happen.”

Riley, on having had to reload on the fly and possibly again in 2016, “It’s fired me up. I don’t like to get beat at anything.”

Riley on Wade, “There’s the possibility of Dwyane can return to where he was before he ceded a good part of his game to LeBron.”

Riley on Bosh, “He’s the most versatile big man in the NBA. And that’s what the market was…I’ll be damned if I was going to let him walk out the door. I’m gonna tell you that.”

Riley also believed Luol Deng wanted to join during first meeting. But Miami was operating as capped team at time.

Riley says the Heat are still looking for a wing (Wade backup) and a big, but will let market come to them. Haven’t ruled out Oden.

Riley spoke about how the Heat were building “a generational team” and “that chain has been broken prematurely.” But plans to repair it.

More Riley: “I don’t get hurt. Very rarely do I get hurt. My wife will hurt me. My daughter might hurt me. And my son. But this is business”

Pat Riley reiterated the plan that has been mentioned here often: compete in conference for two years, jump into 2016 market.

Final thing: Riley did confirm what I’d heard, that the Heat tried to get in on Carmelo. “But we were a little late to that party.” — Ethan J. Skolnick (@EthanJSkolnick) July 30, 2014