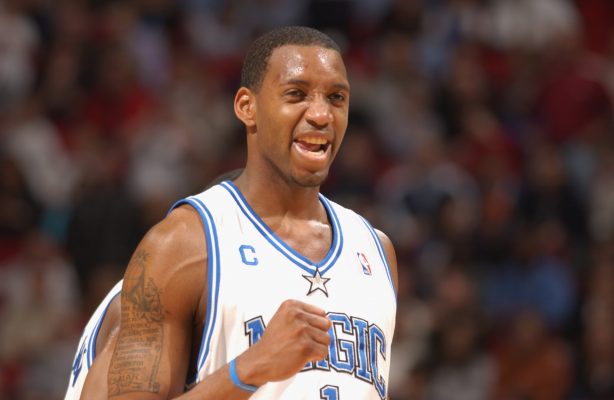 The Miami Heat organization, specifically team president Pat Riley, has a pristine reputation around the league for going after and landing prized free agents. Trying to land Tracy McGrady in his prime was no different.

ESPN’s Brian Windhorst sat down with Adrian Wojnarowski via “The Woj Pod” and detailed how Riley made his extravagant pitch to McGrady back in the day:

“They bring him down on a private jet and they bring him to Alonzo Mourning‘s house on the same day. And they have drinks and they hang out and you know Zo was, like, one of the coolest guys in the league. He still is one of the coolest guys in the league. They’re chilling at Zo’s house and all of a sudden, this speedboat pulls up. And Zo says, ‘Hey Tracy, let’s go for a ride.’ They get into the speedboat. They hit go and the speedboat goes 80 miles an hour across Biscayne Bay, zapping by the arena, downtown Miami, beautiful. It pulls in to Pat Riley‘s house down the cove. And Riley’s standing there holding the max contract offer.”

Windhorst also went on record saying many executives within the organization believe it was the second best pitch the Heat had ever made, following the show they put on for forward Gordon Hayward last summer.

According to the Sun Sentinel’s Omar Kelly, some Eastern Conference executives weren’t completely sold on McGrady ever being serious when considering Miami as a destination:

“According to one Eastern Conference general manager close to the discussions, the Heat did have two separate sign-and-trade deals on the table to land McGrady, but both fell through for various reasons. The deciding factor, however, came down to McGrady wanting to sign with Orlando, his hometown team, all along. It’s widely suspected that McGrady was only using Miami as a bargaining chip, leaving Riley and the Heat empty-handed after a day’s worth of trade talks.”

Yet, with the possibility of having the tandem of McGrady, Tim Hardaway, and Alonzo Mourning, the East could’ve been Miami’s for the taking. It’s not hard to see why Riley went the lengths he did to attempt to nab McGrady, who went on to make seven All-Star appearances in the following seasons.
[xyz-ihs snippet=”HN-300×250-TextnImage”]