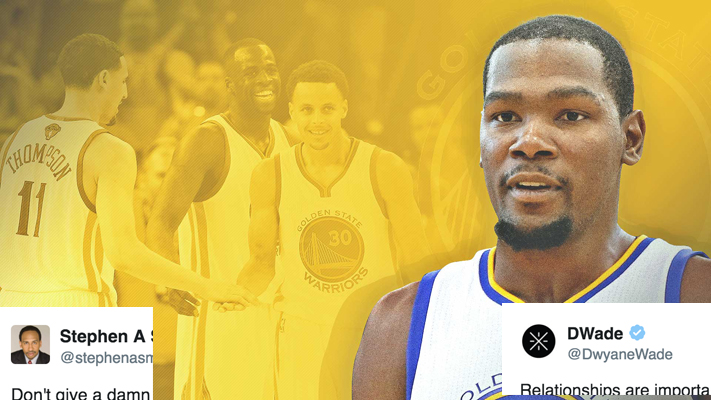 Kevin Durant just shook up the NBA landscape with his decision to join the Golden State Warriors. Here is some of the mixed reaction from around the league, players and analysts alike.

When the news broke, Dwyane Wade had a strange tweet whose meaning is still unclear. To the best of our knowledge, it seems like another subtweet at the Miami Heat front office that obviously just lost out on Durant.

With respect to the Durant news, Stephen A. Smith was ready as ever with a scorching hot take:

Don't give a damn what anyone says: weak move by KD. You go to GSW, the team who beat you, when you're already on a title contender? Please!

The western conference regular season and playoffs next year is going to be straight heavy competition!! Even more than last year?. Excited

Detroit Pistons big man Andre Drummond still has his doubts about how this new Warriors team will play:

Everyone is so hyped up on the match up problems on the offensive end? They still gotta come down the other end.. Not a very big team?

The Portland Trail Blazers got knocked out by the Warriors last year and the job for the starting backcourt isn’t getting any easier:

The game has really changed. #happy4thofjuly

"The BasedGod" wants to speak,As life unravels and superstars make decisions that change lifes, welcome home KD the curse is lifted – Lil B

But Washington Wizards center Marcin Gortat said what we were all really wondering: