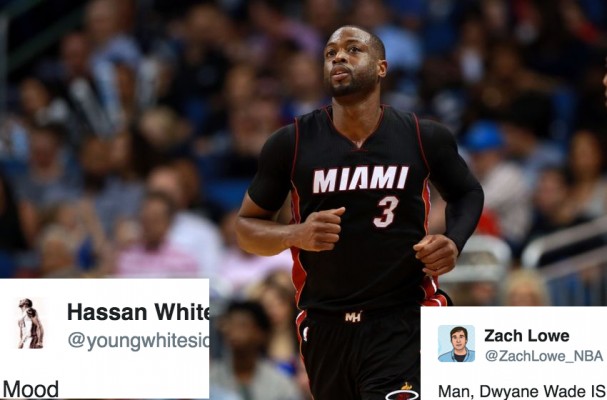 The Dwyane Wade news hit everyone in South Florida like a hurricane. You could see it coming, but you never really thought it would make landfall.

Well, it did and then some.

Wade leaving the Miami Heat felt like the heart and soul were being ripped out of this fanbase. Players and analysts alike joined Heat fans in shock as the 13-year veteran decided to go back home.

Let’s look at the best reactions from around the league:

Hassan Whiteside pretty much nailed it on the head with this tweet. The “Blurred Mr. Krabs” meme is one the most popular images shared on social media to show the shocking news of Wade leaving.

One of Wade’s closest friends, Chris Paul, shared this photoshop, congratulating him on the move.

Jeremy Lin who guarded Wade during this past year’s playoffs definitely did not see this coming.

I've seen it all…

Dorrell Wright is one of Wade’s closest friends since he joined the league and even he was shocked by the announcement.

Eric Bledsoe and Brandon Jennings tweeted about how competitive and exciting the following season is setting up to be.

This season about to be one for the books!

It wasn’t just the players who couldn’t believe Wade was leaving Miami, analysts and reporters around the country were almost at a loss for words. One the best national NBA writers Zach Lowe had this to say:

Man, Dwyane Wade IS the Heat. This is…this is a lot to process.

We definitely agree with you, Zach. TNT’s David Aldridge expressed a similar sentiment as the news was breaking.

While fans adjust to this new reality of a Heat team without Wade, the front office is scrambling to find free agents to plug the hole left by him. We will have to see if Pat Riley has any moves left this offseason because he has already struck out twice, and the future is sure looking bleak at the moment.
[xyz-ihs snippet=”Responsive-ImagenText”]