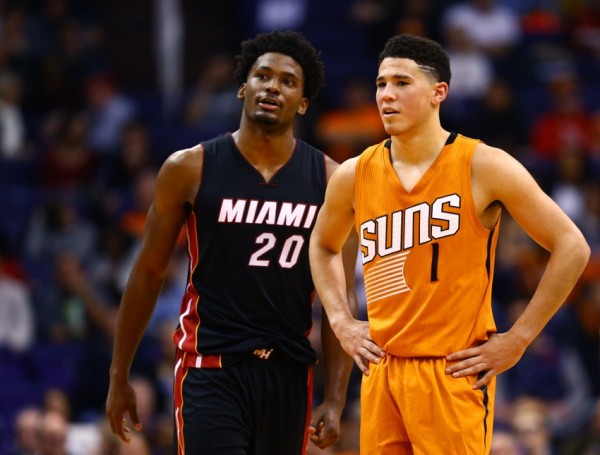 On the eve of the Miami Heat‘s season opener, there are still some voices in the NBA who feel that the Heat made a mistake picking Justise Winslow in the 2015 NBA Draft.

Barry Jackson of the Miami Herald spoke to two NBA scouts over the summer who said that the Heat should have drafted Phoenix Suns guard Devin Booker over Winslow. The Suns drafted Booker with the 13th overall pick, just three selections after Miami had snatched up Winslow.

The core of their reasoning was fueled by the assumption that Winslow cannot improve much on the offensive end of the floor.

“Winslow can handle, rebound, defend; he did the little things in a very effective way,” one Eastern Conference scout told Jackson. “But he’s got to be able to score to be a starter on a good team. Even if the Winslow and Booker picks were good for both teams, Miami picked the wrong guy. Booker will be the better pro.”

Booker was one of the better offensive rookies in the league last year scoring 13.8 points per game and shooting 34.3 percent from behind the 3-point line on a terrible Suns team that only won 23 games.

Although Winslow did not score as many points, he was a lockdown defender and crucial part of the Heat’s playoff run to the Eastern Conference semifinals last season. Josh Richardson, echoing the sentiment of most Heat fans, believes Winslow’s defense makes him a huge asset especially when they face “giant small forwards” like Carmelo Anthony and LeBron James.

The Heat still believe that Winslow can be a special player if the rest of his game catches up to his elite defense. He spent the summer working with a shooting coach to improve the mechanics of his stroke. The second-year small forward looked more comfortable scoring during the preseason, but there is no doubt Booker will be the better offensive weapon to start the season.

In fact, former Heat guard Dwyane Wade praised Booker after his 34-point game against Miami saying, “He’s one of the future (top) two-guards in the league.” Of course, Wade has been a huge fan of Winslow ever since the Heat drafted him, as the Duke University product looked to Wade often for advice last season.

While there is a case to be made for Booker being the better player at the moment, it is fair to say that Winslow has a lot more potential to improve his game.
[xyz-ihs snippet=”Responsive-ImagenText”]