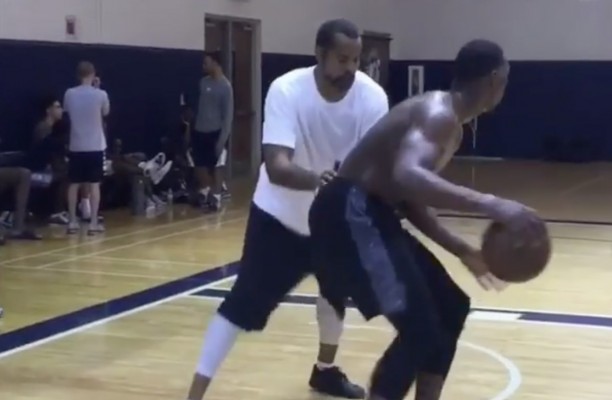 Miami Heat center Bam Adebayo turned a lot of heads as a rookie during the 2017-18 NBA season, and it looks like he is already working on improving as a player this offseason. According to several Instagram videos posted on Friday, Adebayo is working out with former Detroit Pistons All-Star Rasheed Wallace.

Wallace posted the videos to his own Instagram page. The first video depicts the former Pistons star showing Adebayo one move to get to the basket. The other two show Wallace working with Adebayo on increasing his strength and endurance.

Ssssooooo about last night!…. young fella hungry so let’s eat.. just another day at the office… @bam1of1 just wants to work… love it….

In his rookie campaign, Adebayo averaged 6.9 points and 5.5 rebounds per game, but he showed the potential for much more production when given the opportunity. In the month of February, when he averaged 21.5 minutes per game, the 6-foot-10 center averaged 9.1 points and 6.9 rebounds. He also recorded three triple-doubles that month including a monster 18-point, 10-rebound performance against the Orlando Magic on Feb. 5. With all of the trade rumors surrounding fellow Heat big man Hassan Whiteside, it is quite possible that Adebayo will enjoy a much larger workload next season.

Interestingly, Wallace was known throughout his 16-year career as a big man who could score both near the basket and from deep, averaging 33.6 percent shooting from beyond the three-point line. It is unclear whether or not Adebayo is looking to add that facet to his game, but it is certainly something to keep an eye on.

There are already a lot of reasons to be excited about the former University of Kentucky star. If he continues working out with players like Wallace, Adebayo’s future seems quite bright indeed.
[xyz-ihs snippet=”HN-300×250-TextnImage”]