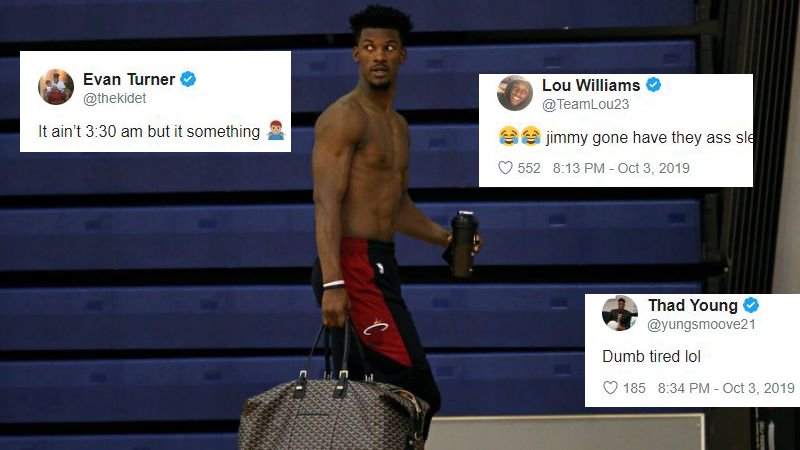 The ferocious work ethic of Miami Heat veteran Jimmy Butler has been on display during much of the past few months, with some of his new teammates inspired by his efforts.

However, Butler’s recent 3:30 a.m. workout caught the attention of other players in the league, with a few of them taking to social media to offer playful jabs at his dedication.

?? jimmy gone have they ass sleepy as shit lmao

Los Angeles Clippers guard Lou Williams will turn 33 later this month and is set to begin his 15th NBA season, while 30-year-old Evan Turner of the Atlanta Hawks is poised to begin his 10th season in the league. Career longevity of that sort requires making a concerted effort to stay in top shape, with Butler clearly understanding the necessary sacrifices required.

Butler turned 30 last month, but is clearly not jaded by the rigors of NBA life as he gets ready to begin his ninth NBA season. He’s playing for his fourth team in as many seasons, but now has a new four-year, $142 million contract that removes any uncertainty about his status.

The Heat made two exhaustive efforts to acquire him before he became a free agent, with the second try going down to the wire before success was achieved. They’re no doubt looking for him to deliver the type of statistical numbers that have made him a four-time All-Star and a member of two All-NBA squads.

Judging from his early-morning workouts, Butler appears driven to make an immediate impact with the team through his play and intense leadership. The Heat are hoping that such focus results in the team once again reaching the postseason and making some noise once they get there.