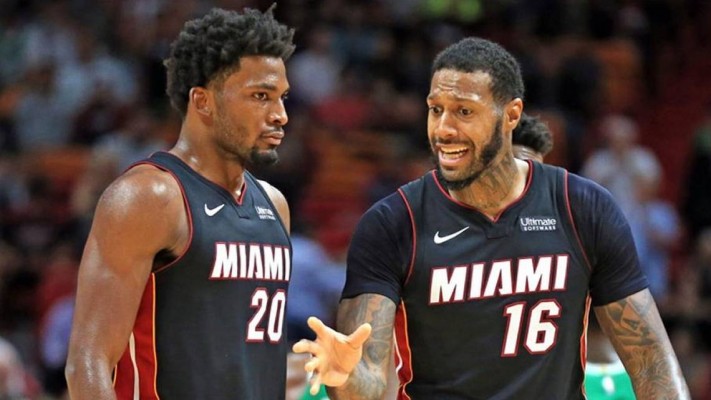 The Miami Heat are fully aware of their incredibly mediocre start to the 2017-18 NBA season. That’s because this same group went through a daunting 11-30 start in last year’s campaign and is not trying to replicate yet another slow start just to finish right outside of the playoffs.

“That’s why we addressed this so early,” he said. “We feel like everybody is on the same page now. We know what we need to do, as long as we put some work in. That’s why we had this meeting.

“On the floor, we don’t talk much and I think that’s a problem, because you need to be comfortable to say, ‘You need to be on the help side,’ ‘You need to do this for me.’ The list goes on and on.”

A team meeting was held on Sunday to clear the air, hold players accountable, and discuss what the team needs to do to break out of its current two-game skid, despite not having their star center in the lineup.

“We had our discussions this morning,” forward James Johnson said. “We aired it out this morning. A lot of people took heat. I think it was the best thing for us to do, even more important than film. That’s what this culture is about, that’s what we’re about — staring guys in the eyes, telling guys the truth and that’s how you show you really love somebody.”

Hassan Whiteside is expected to miss his fifth straight game on Monday night with a bone bruise on his left knee, however, Johnson says that the Heat can’t just sit around waiting for their starting center to return.

“We’re going to keep fighting through it and figure out ways to win without him, because you never know, it’s a long season. You never know … he might be out the rest of the season or he could be out a couple more games,” he said. “But we need to figure it out now.”

Heat head coach Erik Spoelstra said on Sunday that Whiteside is now going through non-contact work in practice, but he still wants his center to go through some contact practices before he returns.

The Heat will get a chance to redeem themselves as they take on a new-look Minnesota Timberwolves on Monday night at Target Center.
[xyz-ihs snippet=”Responsive-ImagenText”]