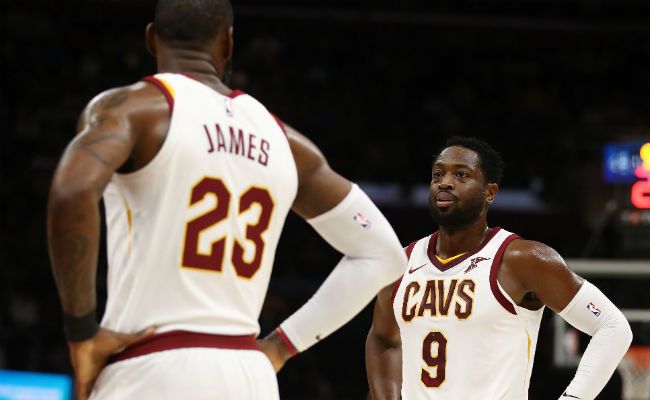 By now, the 2018 NBA Finals are all but over and the LeBron James free agency sweepstakes have all but begun. With that in mind, something James said during a press conference on Thursday morning may be of special interest to Miami Heat fans everywhere.

During the press conference, James reflected on how his former Heat and Cleveland Cavaliers teammate Dwyane Wade could have helped him overcome the Golden State Warriors this season.

LeBron says he still thinks about how things could be different if Dwyane Wade was still with #Cavs pic.twitter.com/UDcwwS951M

“I believe that he could have been very, very good for us in the postseason,” James said of Wade. “He’s the guy that’s kind of built for the postseason at this point in his career, who lives for the moment. So, I definitely think about that. It seems so long ago that he was even a part of the ball club. I definitely think about that from time to time.”

Wade started the 2017-18 season on the Cavs’ roster before he was ultimately traded to the Heat prior to the trade deadline. While Wade underperformed during his few months in Cleveland, he was able to recapture glimpses of greatness once he was back with the Heat.

James’ words could be nothing more than a nod to a great teammate and a great friend. They could also be a hint that James is considering a reunion with Wade and the Heat back in Miami. James is a free agent this summer, and according to recent odds released by Las Vegas bookies, Miami is among the favorites to land to four-time MVP.

Wherever James ultimately ends up on signing this summer, it’s sure to be quite the circus until his decision is revealed. While it seems like a long shot that he will be back in South Florida, Wade and the Miami faithful would surely welcome him with open arms.
[xyz-ihs snippet=”HN-300×250-TextnImage”]