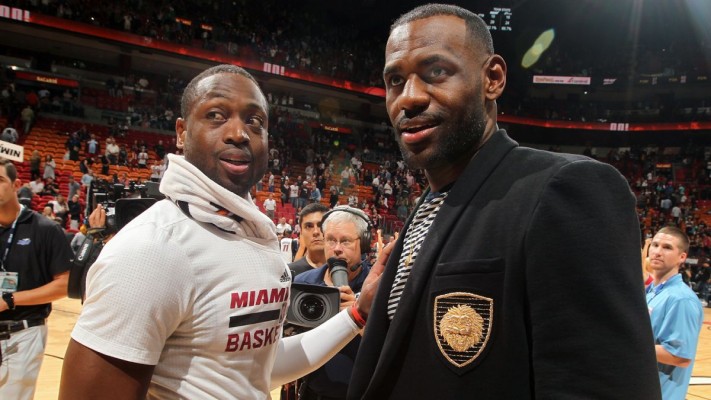 After a summer of wild spending, a two-year, $48.5 million contract for an aging veteran with multiple championships would seem like no big deal.

But just a few years ago in 2013, when the Los Angeles Lakers handed Kobe Bryant that deal without negotiation, the walls around NBA circles seemed as though they would come crashing down.

At the time, Bryant was coming off of a devastating Achilles tear, and the salary cap was nowhere near the exorbitant levels that it reached this summer.

When comparing Bryant’s situation to Dwyane Wade and the Miami Heat‘s, one can’t help but wonder why the Heat were so unwilling to treat Wade with the same respect that the Lakers treated Bryant with.

And of course, one of Wade’s oldest friends in the NBA, LeBron James, couldn’t understand how the Heat could operate with such disregard to the franchise’s all-time greatest player.

“They was in disbelief that I didn’t have any deal that I wanted. Bron always said when we was in Miami, he always said, ‘D-Wade is going to be like Kobe. He’s going to get that Kobe deal.’ So I think their disbelief was, ‘Why are you even a free agent? You shouldn’t even be,’” Wade told ESPN.

And when examining the situation further, it becomes even harder to understand why Wade was not given the type of contract he wanted, which was reported to be two-years at $50 million.

Unlike Bryant, Wade was not coming off of a career-altering injury. In fact, Wade had just put in his best and healthiest season since the first time he and James suited up together in 2011. Wade played in 74 games, his highest total since 2011, and averaged 19.0 points, 4.6 assists and 4.1 rebounds.

Furthermore, Wade had taken discounts on his contracts for years in order to allow the Heat to put together the type of rosters that would allow them to consistently compete for NBA championships.

Because of that, Wade and the Heat have together won three titles, and Wade was named the NBA Finals MVP in 2005-06.

On the flip side, after offering Bryant the two-year deal, the Lakers suffered in turmoil and ended up in the NBA Draft Lottery for a few years. Even now with Bryant retired, the Lakers seem to be a long way off from contending for the playoffs. So it is understandable as to why the Heat were hesitant to offer an aging Wade the same type of deal.

And without Wade, the Heat are not the same team, but with Hassan Whiteside, Goran Dragic and Chris Bosh still on the roster, the Heat are primed for another playoff run in 2016-17.

But now, because of the obvious disconnect between Wade and the Heat’s upper management, the 12-time All-Star will be suiting up for the Chicago Bulls. And the Heat will begin their search for the next D-Wade.
[xyz-ihs snippet=”Responsive-ImagenText”]

Sean Curran is currently a sports reporter for the Hornell Evening Tribune in Hornell, NY. He was raised in Pennsylvania as an Allen Iverson fan and has loved the NBA ever since. He graduated with a communications and history degree from Alfred University, where he was also a four-year member of the varsity basketball team. He enjoys studying the history of the game. Follow him on Twitter @_sean_curran.